Mixed reaction to Emirates plans for a windlowless plane 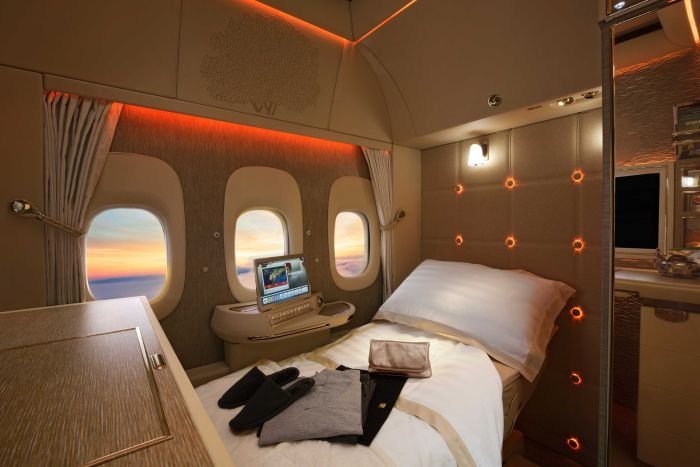 Emirates have announced plans for first class suites without windows in it’s 777-300ER aircraft. The suites would instead have 3 virtual windows.

The President of Emirates, Sir Tim Clark, said the virtual windows would be full display windows that have images beamed from outside onto them using fibre optics. He also said the technology is better than seeing it with the naked eye, and could lead to an entire windowless cabin.

Those @Emirates virtual windows are not a gimmick. Easily the coolest takeoff I’ve ever seen outside the cockpit. And I was sitting in a middle suite! pic.twitter.com/wFcte8hBSK

Removing windows would reduce the weight of an aircraft by 50% , leading to less fuel consumption and heat loss.

Emirates airline says planes in the future will be windowless https://t.co/C2b0WaAG0h

Aviation expert, Douglas Drury from the University of South Australia told ABC News Australia, “The idea that we have to look out and have the window shades raised during take-offs and landings is in the event of an emergency. The regulator may get to a point, they could say you can do whatever you want from row one to 25 but on the emergency exits you have to have a window there. Or you could also set up a system where the camera technology had its own power pack and the windows could be generated via batteries and project that image in real time in the event of technical failure.”

Mr Drury also believes removing windows may strengthen the plane, “I think this is a very big step because they have to build the support structure around the windows and as we’ve seen recently the windows are vulnerable to penetration, to breaking. That happened with a Southwest Airlines jet in the United States recently, the engine blew and the window was gone and the passenger was pulled out of the airplane. That is a structural issue and not having windows would be somewhat of a safety barrier.”

Even the Gemini astronauts refused to ride in a capsule if it didn’t have a window. The window is the difference between being a passenger or just part of the cargo. @BreakfastNews @mjrowland68 @LaTrioli #breakfastnews

Professor Graham Braithwaite from Cranfield University told BBC, “Being able to see outside the aircraft in an emergency is important, especially if an emergency evacuation has to take place. Flight attendants would need to check outside the aircraft in an emergency, for example for fire, before opening a door and commencing an evacuation – and anything that needed power to do this may not be easy to get certified by an aviation safety regulator.”

The European Aviation Safety Agency also told BBC, “We do not see any specific challenge that could not be overcome to ensure a level of safety equivalent to the one of an aircraft fitted with cabin windows.”

Original Tube trains were windowless – despite the passengers having nothing to see they freaked out and so changes were swiftly made. That was just for short journeys. A windowless plane would be far too mentally claustrophobic.

However, Peter Gibson from Australia’s Civil Aviatian Safety Authority told The New Daily that safety briefings say window blinds have to be up during takeoff and landing. “This is so the crew can see what’s happening outside the aircraft during an emergency landing. The optimum maximum time to evacuate an aircraft is 90 seconds. This is what the crew is trained to do. But you don’t want to be wasting time getting people to lift the blinds up. The crew needs to be able to quickly assess which side to evacuate the plane, for example if there is a fire, because every second counts. One clear issue [with windowless planes] is being able to visually assess what’s going on outside an aircraft – the situational awareness of what’s happening outside is critical.”

Professor Greg Bamber of Monash University also told The New Daily, “[Flight attendants] need to be able to quickly see whether, in an emergency, the plane is landing on water, or a forest, or an open field or a runway. They need to know which side of the plane to evacuate before actioning the emergency slides. Not having windows could delay that response time. Virtual windows would also rely on technology working. But, as we know, technology can crash, whereas an old-fashioned window can always be opened.”