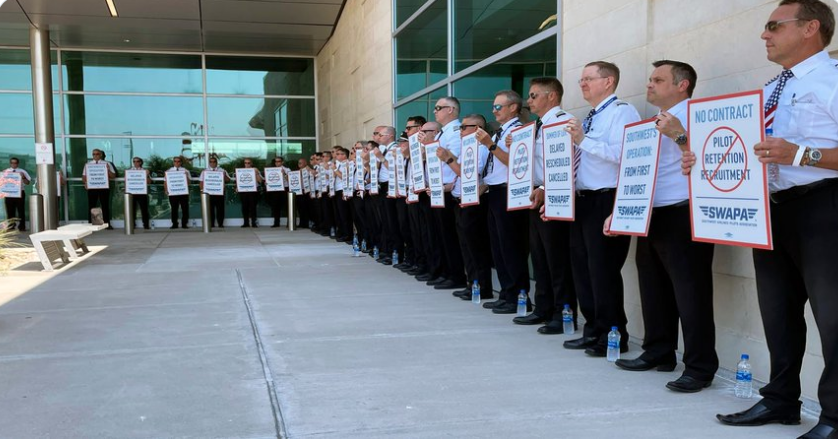 More than 1,300 Southwest Airlines pilots and crew gathered and protested outside Love Field Airport in Dallas on 21st June.

The protest started at 9 AM and was scheduled to end at 12 PM. They protested asking for better management of staff shortages, contracts, and working hours. The protest was led by the Southwest Airlines Pilots Association (SWAPA), the union which represents the pilots.

SWAPA has been in negotiations with the airline for a new contract for the last two years, saying that its employees have been overworked due to understaffing, although the demand for air travel has been increasing continuously.

Commenting on this protest, Captain Casey Murray, a pilot, and president of the SWAPA said:

“Our pilots have had to address the fatigue issue with management publicly, which is something that we never want to do, but ultimately, our pilots have been tired and have been trying to do everything they can.”

As seen in the footage shared on the internet, the pilots protested holding signs that said things like “Summer of Luv: delayed, rescheduled, cancelled” as well as “Our passengers and pilots deserve better.”

Airlines have been forced to delay or cancel hundreds of flights in recent months due to a shortage of pilots amid increased travel demand.

“Southwest Airlines respects the rights of our employees to express their opinions, and we do not anticipate any disruption in service as a result of this single demonstration,” an airline spokesperson said in a statement.

“For 51 years, we’ve maintained a legendary Southwest Culture that honors our valued Employees.”