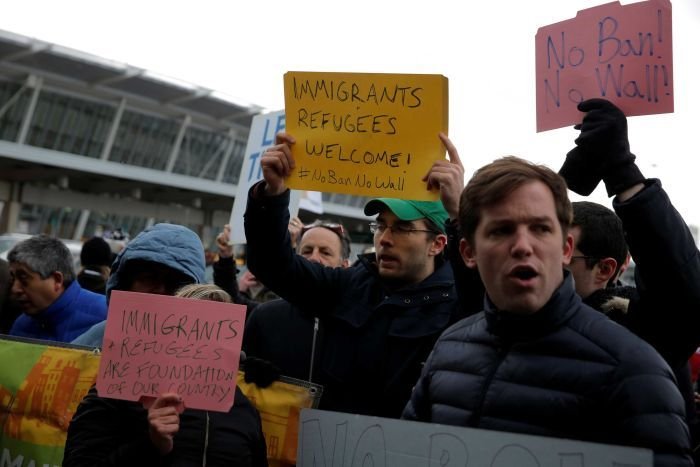 President Donald Trump’s announcement of a sweeping ban on people from seven Muslim-majority nations has prompted an outpouring of grief, shock and anger around the United States.

Donald Trump’s executive order to close America’s borders to travellers from some Muslim-majority countries caused chaos on Saturday, as multiple people who had flown to the US were held at major airports while others were barred from boarding flights or were pulled off planes overseas.

By Saturday evening, there were 11 people in detention at New York City’s John F Kennedy airport who had arrived from Iraq and other barred countries, according to two Democratic members of Congress, Jerry Nadler and Nydia Velazquez, who joined protests at the airport.

Pre-approved refugees, students and workers holding visas and residency green cards were barred from flights to the US, according to reports emerging from Amsterdam, Frankfurt and Cairo and other cities across Europe, the Middle East and Africa.

By evening in New York, hundreds of protesters had massed at Kennedy airport, and demonstrators gathered at at least 10 other major airports, including Dulles, LAX, San Francisco, Denver and Philadelphia.