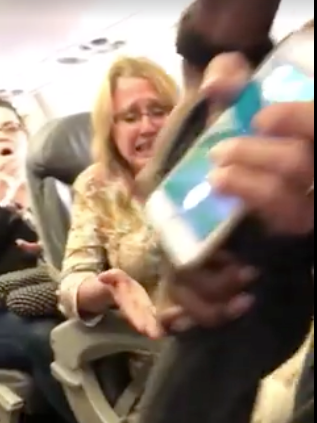 A video posted on Facebook late Sunday evening shows a passenger on a United Airlines flight from Chicago to Louisville being forcibly removed from the plane before takeoff at O’Hare International Airport.

The video, posted by Audra D. Bridges at 7:30 p.m. Sunday, is taken from an aisle seat on a commercial airplane that appears to be preparing to take flight. The 31-second clip shows three men wearing radio equipment and security jackets speaking with a man seated on the plane. After a few seconds, one of the men grabs the passenger, who screams, and drags him by his arms toward the front of the plane. The video ends before anything else is shown.

A United spokesperson confirmed in an email Sunday night that a passenger had been taken off a flight in Chicago.

“Flight 3411 from Chicago to Louisville was overbooked,” the spokesperson said. “After our team looked for volunteers, one customer refused to leave the aircraft voluntarily and law enforcement was asked to come to the gate.

“We apologize for the overbook situation. Further details on the removed customer should be directed to authorities.”