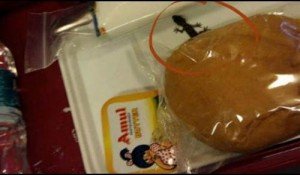 A picture of a lizard in the meal tray of a flyer purportedly on one of Air India’s flights was doing the rounds on social media and also left the Civil Aviation Minister fuming but the airline strongly denied any such incident saying it was “baseless”.

The incident reportedly took place last Thursday when in the Air India flight from Delhi to London.

“This has reference to a report in the media, including on the social media, that a passenger had found a lizard in the meal tray on board AI-111 (Delhi-London) of 11 June, with photograph attached,” the airline said.

Air India has investigated the “incident” and has found it to be false and baseless, the airline said in a statement.

No such complaint by any passenger has been received on board the flight or at the Air India office in London, it said.

However, before Air India issued a denial, Civil Aviation Minister Ashok Gajapathi Raju said the “issue” is serious and Air India was not expected to serve lizard to its passengers.

“That’s also a serious thing. Air India is not expected to serve lizard neither the cooks are expected to cook lizards,” Raju told a TV channel.