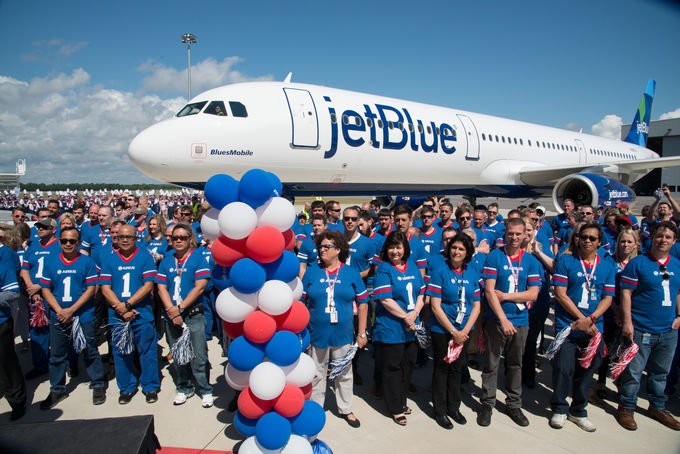 In a festive American football-themed ceremony held yesterday, Airbus marked the official handover of its first A320 Family aircraft produced at the Airbus U.S. Manufacturing Facility in Mobile, Alabama.

Appropriately, the no. 1 aircraft was delivered to U.S.-based JetBlue – a milestone that underscored the strong global “team” behind Airbus’ position as a leading aircraft manufacturer that remains close to its customer base around the world.

JetBlue operates a predominately Airbus fleet, including 130 A320s and 26 A321s. The carrier designated its milestone U.S.-built A321 “BluesMobile” – which combines its tradition of naming aircraft with the word “blue” and a recognition for this single-aisle jetliner’s production in Mobile, Alabama.

Yesterday’s landmark delivery to JetBlue comes just over three years since Airbus officially broke ground at the Mobile Aeroplex at Brookley site in April 2013. Final assembly operations commenced in the summer of 2015, with the no. 1 aircraft performing its maiden flight last month.