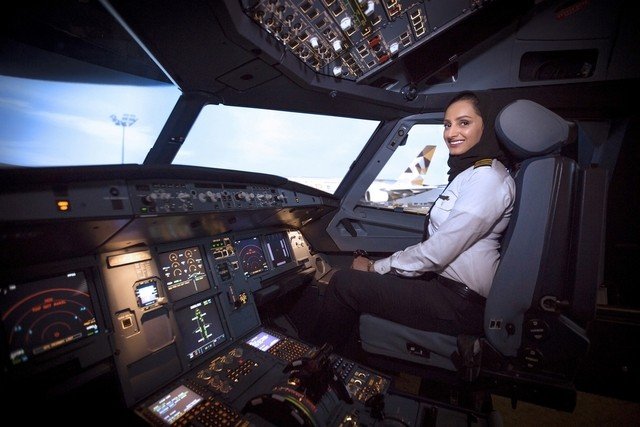 Ms Al Mansouri said that she also dreamt of becoming a pilot and realised her dream when she graduated from Etihad’s training academy six years ago.

Ms Al Mansouri joined the cadets in 2007 before signing up to Etihad’s training programme, which allows prospective pilots to start from scratch and become qualified first officers in about 26 months.

At the time, she was one of two female Emiratis in a classroom of more than 500 men, choosing a career in a traditionally male-dominated field.

After graduating from the academy, Ms Al Mansouri worked as a second officer on the A320, before graduating to the A330 as a first officer.

It was then she made her bid for a chance to fly on the A380.

Her inaugural flight on the Airbus from Abu Dhabi to London in 2014 was “very overwhelming”, considering the sheer size of the plane and being responsible for more than 500 passengers on board, Ms Al Mansouri says.