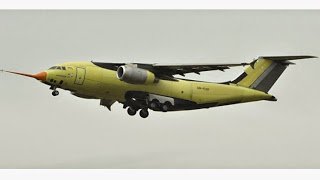 Antonov has begun flight trials of its new An-178 transport aircraft, some five years after the development of type was first announced. The maiden flight took place out of Kiev-Antonov Airport (Gostomel) in Ukraine on 7 May, and lasted for approximately one hour. No specific details relating to the flight were revealed, neither were the timelines for the remainder of the flight test process or production plans for prospective military customers.