NEWS At Nice Airport, an employee punches a passenger holding a baby in the face for complaining about easyJet flight delay 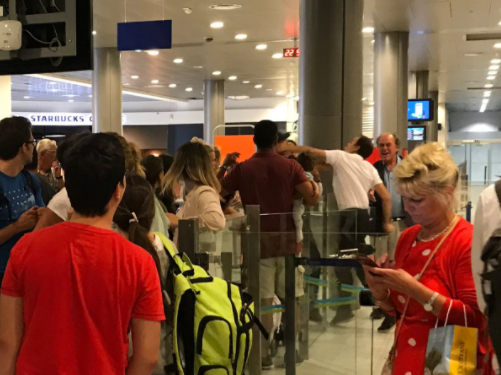 The event took place at the end of a day of stress for more than 150 passengers. They had been due to travel on flight #U22122 from Nice-Cote d’Azur airport at 11am. The airline says it “was delayed departing Nice due to a technical issue with the aircraft”.

The original aircraft had arrived from Luton slightly behind schedule. Then there was a fuelling issue, which required another aircraft to be flown out to Nice. So instead of arriving at Luton noon, passengers were obliged to spend the entire day at Nice airport.

Witnesses said that the apparent victim of the assault had complained about the lack of baby food and places for passengers with special assistance needs to sit.

Anna McCrum: “absolute chaos – member of staff just punched a passenger in the face at Nice airport. Waited for 12 hours for this.”