NEWS Baby born on Spirit Airlines #NK971 to Dallas will get free flights for life! 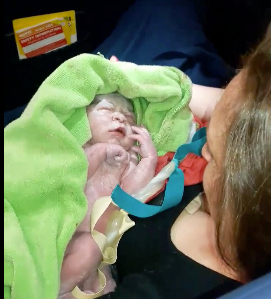 Spirit Airlines gifted a newborn baby with free air travel for his entire life after he was born on a flight.

Cristina Penton was 36 weeks pregnant when she boarded a Spirit Airlines plane travelling from Ft. Lauderdale destined for Dallas/Ft. Worth. Less than an hour into the flight, she realized she needed medical assistance: she was having contractions.

“I didn’t think I was having the baby because it was too soon, but after a few minutes I knew I needed medical attention,” Penton said, according to a press release from the airline. “Soon after that, it was clear I was having my baby, and I was in pure panic.”

She was in luck, though. Flight attendants determined through contact with doctors on the ground that a pediatrician and a nurse were on board.

The flight was diverted, and landed in New Orleans, La. But the baby, named Christoph Lezcano, had already been born. When the plane landed in Louisiana, emergency medical technicians were on the ground and Penton was taken to the hospital.

Spirit Airlines officials visited Penton and Christoph at the hospital Tuesday, where they gave the newborn free flights for life (on his birthday) with the option to bring a guest. The airline also said they are planning a sale in honor of the baby.