The Boeing Company held their “100 Year Founders Day Centennial Celebration” at the Museum Of Flight, located at Boeing Field, Seattle, Washington, for three days in July. Boeing’s corporate birthplace was in Seattle, Washington in 1916. Boeing reserved all of the museum’s facilities and parking lots for this event. Boeing’s event contractor erected a temporary amphitheater for seating up to 2,000 people, placed at the end of the museum’s main parking lot. Opening the celebration on Friday was Boeing’s board chairman, CEO, and president, Dennis Mullenburg, and CEO, and president, Boeing Commercial Airplanes, Ray Conner. The celebration attracted nearly 100,000 attendees, Boeing’s current and retired employees, Boeing customers, museum board members and executives, Alaska Airlines representatives, and aviation industry invitees. On opening day, Boeing staged an unprecedented line-up of their entire 7- Series commercial jetliners on the tarmac, ranging from a rare B-707 owned by Omega Air Refueling, Inc., to a brand new B-787 Dreamliner soon to be delivered to Japan’s airline, ANA. 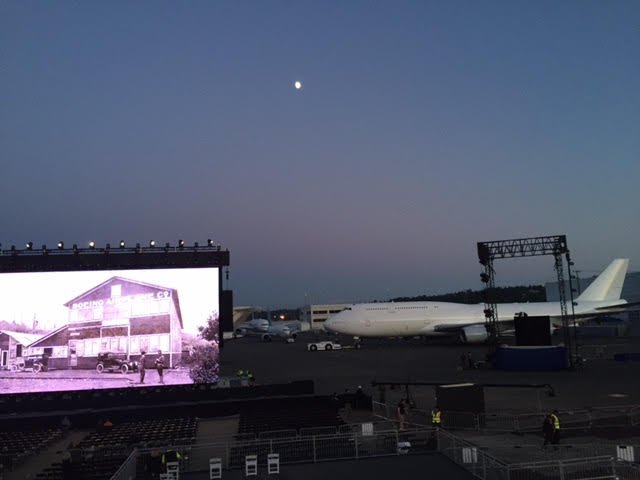 B-747 all white “white tail” to be used as a projection screen. Photo ©Frank Leyritz

Parked at the tarmac side of the museum’s main parking lot was Alaska Airlines’ new B737-900ER jetliner with its centennial livery paint theme “Boeing 100 years strong“, a score of Boeing commercial and military aircraft, showcasing the old and the new, starting with Boeing’s oldest, the 1916 Boeing B&W, and their latest model, the B-737 Max, still undergoing flight testing and FAA Certification. Alaska Airlines currently has on order 37 of the new B-737 Max 8’s. Boeing had several aircraft owners fly in their rare vintage planes such as a P-51 Mustang fighter, a Boeing 1938 Stearman, and a North American B-25 Mitchel bomber, many planes performed fly-overs, or were open for attendees to take interior tours. Adding to the spectacular airshow atmosphere were food trucks, scores of tents containing Boeing’s traveling educational exhibit for kids, a give-away of “flypaper” posters, designed by Boeing engineers, for kids to fold into paper airplanes, space and aircraft models exhibits, and a historic aviation photo exhibit. Included in the event schedule was a festival stage placed near three Boeing jets, featuring concerts by 16 different bands. Inside the museum, there are many exhibits focusing on Boeing’s major milestones. Featured in the museum’s theater were big screen videos about Boeing’s history and space related projects, aviation speakers, and aviation panel discussions.

The crowd pleasing highlight at the end of each day was an after dark laser light show in the outdoor amphitheater. A Boeing B-747-300 “white tail” (unsold) airliner, painted all white, served as a moving projection screen. As the 747 was pulled out from the darkness, it appeared at the center, behind the amphitheater’s stage, then the two large projection screens pulled apart so the plane was visible between the screens. The lasers projected dozens of varying aviation artwork onto the fuselage. The show closed with the lasers projecting the corporate logos of all Boeing’s, past and present customers on the plane’s vertical stabilizer (tail), as the plane was towed back into the darkness.

To view the Boeing Founders Day Celebration video, over an hour long, with the laser light show at the end, download at http://www.boeing.com/specialty/foundersday/index.page#/videos, the link is Webcast & Videos.