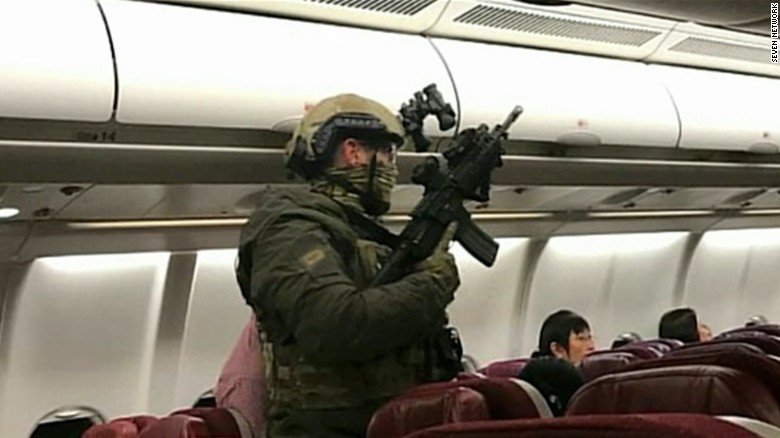 A Malaysia Airlines plane returned to Australia after a mentally ill passenger threatened to detonate a bomb and attempted to enter the cockpit before he was tackled and tied up by passengers, police said Thursday.

The 25-year-old Sri Lankan man had been discharged from a Melbourne psychiatric hospital on Wednesday before buying a ticket on the late-night flight to Kuala Lumpur, Malaysia, Victorian Police Chief Commissioner Graham Ashton said.

Flight 128 was about 10 minutes into a flight from Melbourne when the man walked from his economy seat to the cockpit door clutching an electronic device and threatening to blow up the plane, creating panic among passengers.

Passengers subdued him and tied him up with belts. “At that point, he was essentially trussed up,” Ashton told reporters.

Ashton described the device the man carried as an “amplifier-type instrument.” Passenger Andrew Leoncelli described it as a Boombox portable music player.

He added: “Two or three brave, young Aussies have taken him on and got him to the ground.”

The Airbus A330-300 carrying 337 passengers returned to the airport about 30 minutes after takeoff.

Passengers were kept on the plane for 90 minutes after landing and the plane was searched for potential bombs at a remote part of the airport, Ashton said. Police wearing body armor took the man off the plane. They have determined he had no “terrorist” links or associates, Ashton said.