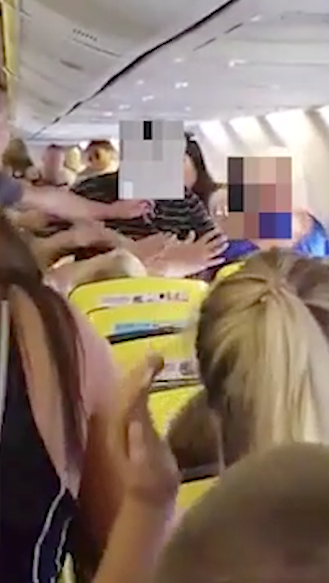 Passengers screamed in horror as punches were thrown on a plane after a ‘mortal drunk’ woman started ‘kicking off’.

In a video of the brawl, men and women aboard the Newcastle to Alicante Ryanair flight can be seen scrapping over the tops of seats. Arms can be seen flailing in both directions as fellow passengers attempt to stop the unseemly fracas.

One man screams ‘Ow, man’ while what appears to be a flight attendant intervenes to end the violence.

Because the flight took off at just 10.55 in the morning on Thursday, Ryanair said it justifies the airline’s call for changes to the sale of alcohol at airports. The firm’s head of communications, Robin Kiely, said it was important to introduce a two-drink limit for each passenger and also a ban on alcohol sales before 10am.

He added: ‘It’s incumbent on the airports to introduce these preventative measures to curb excessive drinking and the problems it creates, rather than allowing passengers to drink to excess before their flights.’

Mr Kiely also said that the aircraft landed on time and one passenger was met by police on the ground after flight crew reported the disturbance.

The passenger has been banned from flying with Ryanair.