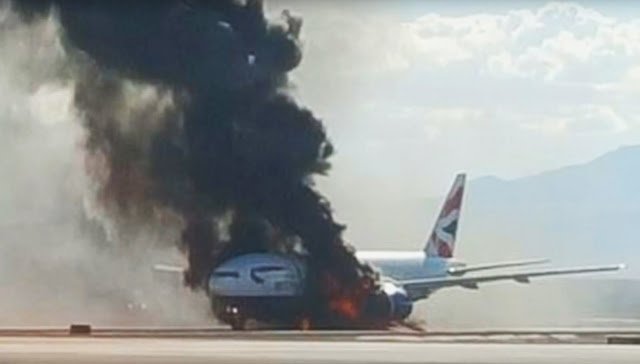 A British Airways jet has caught fire at Las Vegas airport, sending smoke billowing into the air, after suffering what the pilot described as a “catastrophic failure” of the left engine.

The plane – a Boeing 777 heading from the US city’s McCarran airport to London Gatwick – could be seen with flames around its fuselage.

Fire officials said 14 people were taken to Sunrise hospital to be treated for minor injuries, including cuts and bruises, most a result of sliding down the inflatable chutes to escape.

All 159 passengers and 13 crew on board were evacuated, and the fire was swiftly put out by around 50 firefighters. An airport spokeswoman told reporters: “All passengers were evacuated quickly and safely and taken by bus to the terminal.

“We cannot express enough gratitude to the emergency response crews, as well as the British Airways crew.”

The National Transportation Safety Board was investigating the incident, she added.

The plane’s take-off had been aborted shortly before the fire broke out. The Federal Aviation Administration (FAA) said the Boeing’s 777 left engine – manufactured by General Electric – burst into flames.

Dramatic images of flight BA2276 were shared on social media by members of the public at the airport, which is five miles south of downtown Las Vegas.

The first sign of a problem came when one of the BA pilots contacted air traffic control shortly after the plane had begun its take-off procedures: “Speedbird 2276 heavy stopping.”
Fifteen seconds later one of the pilots says: “Speedbird Mayday Mayday. Speedbird 2276 request fire services.”