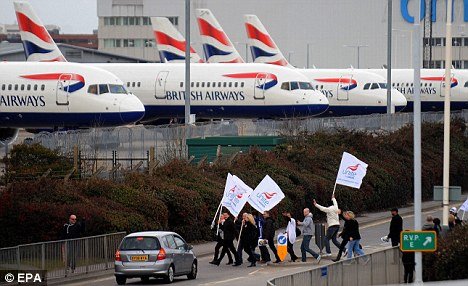 British Airways cabin crew based at the UK’s busiest airport have launched a 16 day strike in a long-running dispute over pay.

Industrial action started on July 1 and is planned to last for 16-days.

“The airline should be under no illusion of Unite’s intent to pursue justice on behalf of its members all the way to the highest court in the land.”

The clash — which has led to 26 days of strikes since January — is over pay gaps between recently hired “mixed fleet” crew and regular cabin crew.

Following the announcement, British Airways said an offer was given with the aim of resolving the dispute – but it was rejected.

A BA spokesperson said: “As on the previous dates when Unite called strikes of mixed fleet cabin crew, we will fly all our customers to their destinations.

BA had applied to Britain’s Civil Aviation Authority (CAA) to use nine Qatar-registered Airbus A320 or A321s during the strike dates.

A BA spokesperson said: “Once again we will be able to fly all customers to their destinations, despite industrial action by Mixed Fleet Unite.

“We will operate a full schedule at Gatwick and London City airports as well as the vast majority of our Heathrow schedule.

“We will merge a very small number of Heathrow services, and all affected customers are being contacted in advance and will be rebooked to alternative flights.

“We would urge customers to ensure that the correct email and telephone details are in their bookings and to check their travel plans on our website, www.ba.com, if they need any further details.”