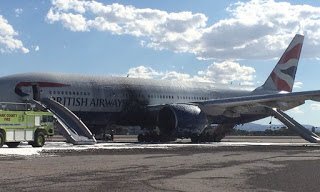 The British Airways Boeing 777 that aborted a takeoff at McCarran International Airport with 157 passengers and 13 crew members aboard in September will fly again. A representative of the London-based airline said Wednesday that crews would be dispatched to McCarran and that work would begin “shortly” to repair the aircraft’s hull to make it airworthy. Noting that “safety is always British Airways’ top priority,” a company spokeswoman said in an email, “The airframe was inspected by a team of highly experienced engineers from Boeing who concluded that the damage was limited and suitable for repair. “A team from Boeing will carry out the repair work, which will be certified to the same high standards as if the aircraft was brand new,” she said.http://ift.tt/1O7TT2l