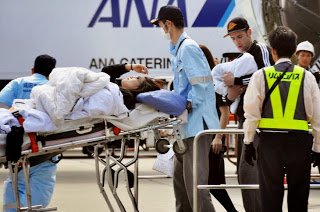 A Canadian woman gave birth aboard a Tokyo-bound plane after going into labor over the Pacific Ocean, a spokesman for Air Canada said Monday, an event the baby’s father described as “completely unexpected.”

The 23-year-old woman delivered a baby girl with the help of a doctor who volunteered after crew asked passengers for medical assistance.

The plane was given priority to land at Narita International Airport, but by the time it taxied to a halt, it had one more passenger than it had started with.

The Air Canada plane from Calgary to Narita landed 30 minutes ahead of schedule after it was given priority by air traffic controllers.

The new mom was seen emerging from the plane in a wheelchair, while her partner carried the newborn in his arms.

Mother and baby were taken to a hospital, where they remained overnight, where they were both reportedly doing well, the Air Canada spokesman said.

The flight crew smiled and waved at the press as they got off the plane.

“Everyone was clapping their hands,” a female passenger told one television program. “She’s such a cute baby with big eyes.”

Air Canada allows women with a normal pregnancy and no previous history of premature labor to travel up to and including their 36th week.