NEWS Chaos At Melbourne This Morning Leaving Passengers Without Coffee 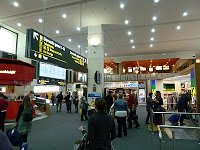 A burst water-main has caused
widespread chaos at Melbourne’s Tullamarine Airport this morning.
The airport wrote on twitter this
morning: We’re working to rectify water supply issue @melair as quickly as we
can. Thanks for your patience.
Terminal toilets were working
during the 3 hour water outage as the reserve water supply was used for the
toilets.
An airport spokeswoman said flights were not impacted.
Monday Morning Passengers who needed their morning coffee went straight
to social media to complain.
Lance Emerson Wrote: ‘OMG no water
at Melbourne airport this morning – meaning NO COFFEE! Where
is the Melbourne
riot police when you need them?
Rosalyn D’Angelo also went to Twitter Quoting: ‘”Due
to a burst water pipe, there is no coffee being served at Melbourne airport
today” Is this April fools?!’

The Airport Has Confirmed That The Water Is Back On.