NEWS Drone Crash at US Open 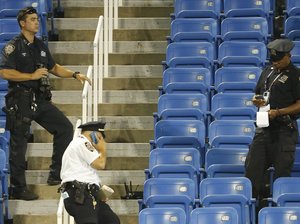 A New York City teacher was arrested after allegedly crashing a drone into the stands during the U.S. Open tennis tournament Thursday night.

During a second-round match between Italy’s Flavia Pennetta and Monica Niculescu of Romania, the black, shoebox-sized drone flew over the court at Louis Armstrong Stadium and then crashed into empty seats and broke apart. The match was stopped briefly while police officers examined the drone.