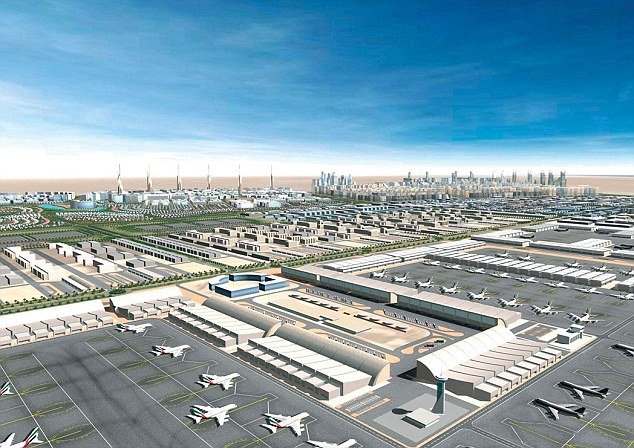 Construction firms working on this airport as well as management teams from Al Maktoum have stated that once the airport has been constructed, it can handle a “theoretical maximum of 225 million passengers” at full capacity. This in theory would be 124 million passengers more than what Atlanta handled in 2015, at 101 million passengers.

The huge first phase of this airport is set to have dimensions of 66,000 square metres to 144,000 square metres. Local firm Al Jaber LEGT Engineering & Contracting have been contracted to work on this phase of construction. The departure building will feature 64 ordinary check-in counters with an extra 10 check-in counters for Business clients. Plans for immigration control will hold 55 counters.

Other expanded features in the airport’s plans feature 12 extra boarding lounges as well as an extension to the emigration transfer and security area. They will also be implementing a baggage screening area for arriving passengers as well as expanding the baggage reclaim to an extra 3 carousels accordingly.

Sheikh Ahmed Bin Saeed Al Maktoum, the president of the Dubai CAA said: “The announcement marks a milestone in the journey of Al Maktoum International, which is set to be the world’s largest airport. Al Maktoum is being designed to become an airport of the future. We are building a range of amenities and facilities that will increase capacity and significantly enrich the airport experience”.

To put the size of this airport into perspective, the current Dubai International Airport (DXB/OMDB), home of Emirates at the moment, recorded 78 million passengers in the year 2015. The Beijing Capital Airport (PEK/ZBAA) came second place at 90 million passengers in the year 2015. The sheer size of Al Maktoum will put the airport at the very top unless other airport’s decide to expand to that size, which is unlikely.

This airport is very much needed for Emirates in particular as the airline is running out of slots for their aircraft. They have received over 70+ Airbus A380 aircraft and have less than 70 less to be received. They also have orders for the Boeing B77W variant as well. Dubai International Airport is expected to hit 100m passengers by 2020, causing huge concerns into whether DXB will be at full capacity by then. They have had to adjust their cargo operations by putting cargo aircraft at Sharjah and other airports within the Emirates FIR accordingly. Emirates plan to move their operations over to Al Maktoum and operate heavily under the 2 airports that will be at full capacity by 2025.