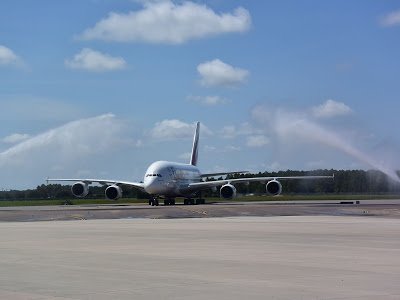 On the 2nd September 2015, Emirates deployed their Airbus A380-800 on the airline’s inaugural flight to Orlando. Orlando is the 10th U.S Destination in the Emirates network. The A380 was a one-off service to celebrate the new route opening. The route will operate daily between the two destinations using their Boeing B777-200LR Aircraft.

“Our new daily service will enable Emirates to grow alongside Orlando, one of the world’s premier leisure destinations and a dynamic business centre,” said His Highness Sheikh Ahmed bin Saeed Al Maktoum, Chairman and Chief Executive of Emirates Airline & Group. “The launch of this nonstop route will bring Emirates’ unique product and award-winning service to passengers flying from Central Florida to our home in Dubai and beyond to more than 140 global destinations. Since 2004, Emirates has carried more than 11 million passengers on its US flights and this new route will open up even more options for passengers travelling to Orlando. Additionally, the aircraft on this route has the capability to carry more than 17 tons of cargo in each direction every day, which will support Florida’s export market.”

“Florida is on a mission to become the global leader in job creation and we are excited about the new Emirates nonstop flight between Orlando and Dubai,” said Florida Governor Rick Scott. “We welcomed more than 97 million visitors to our State last year and every 85 tourists creates another Florida job. We know our tourism industry helps grow our economy and that is why we are investing $145 million at the Orlando International Airport to expand the South Terminal Complex so we can continue to increase domestic and international air service, like the new Emirates flight.”

“Emirates’ nonstop service to Orlando opens a new world of opportunity for us to pursue tourism and business exchanges with the Middle East, Africa and Asia,” said Orlando Mayor Buddy Dyer.

“Business and leisure tourism is critical to Central Florida’s economy and this new direct service will make it easier for travellers to get to and from Orlando, creating new jobs and opportunities for our residents.”