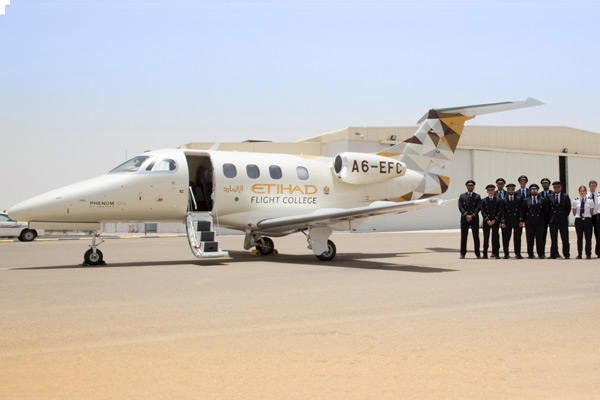 The aircraft arrived at Etihad Flight College’s facilities in Al Ain following a marathon 10 day voyage from Embraer’s manufacturing base in Sao Jose dos Campos, Brazil. The twin jet training aircraft will begin service with the flight college in July 2016. A second aircraft will arrive at the flight college’s base in Al Ain later this month. Two further jets will be delivered in early 2017.

The Phenom will be used to instruct students on the Multi-Crew Pilot Licence (MPL) course. MPL is an innovative competency based approach to flying training using multi-engine aircraft. Introducing Multi Crew Pilot operations from the onset training is more effective, as airline flight crews operate as a team – in older formats, pilots are trained individually.

Marco Tulio Pellegrini, President and Chief Executive Officer, Embraer Executive Jets, said: “Designed for high utilisation, with a pilot-friendly cockpit and docile flying qualities, the Phenom 100E is considered an obvious choice by airlines to prepare its cadets for jet operations. I’m glad to start delivery of Etihad Flight College’s Phenom 100E fleet, which will be the first flight school to use the aircraft in the initial phase of flying training.”

The order for four Embraer Phenom 100E was announced in June 2015. Once delivered, the four new aircraft will bring the number of aircraft in the trainer fleet to 22 – which also includes 10 Cessna 172SP Skyhawk, six Diamond DA42NG, and two EXTRA 300 aircraft.