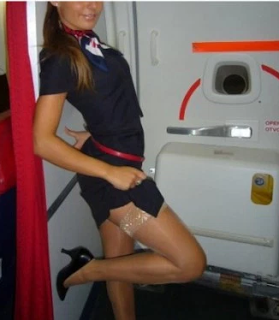 An air hostess reportedly earned around £650,000 over a two year period by having sex with plane passengers in the toilet.
The scale of the woman’s ‘business’ only came to light when she was caught in the lavatory recently, and she was subsequently sacked.
It is reported that she was working for an airline in the Middle East.
A source speaking to the Saudi Arabic language daily Sada said: ‘She admitted that she had sex with many other passengers during flight and that she preferred long distance flights between the Gulf and the United States.’
Airline sources believe the woman charged £1,500 (Dh7,400) for the mile high liaison, an amount she earned on every flight.
The airline has not been named specifically, but Sada has reported that the flight attendant was immediately sacked.