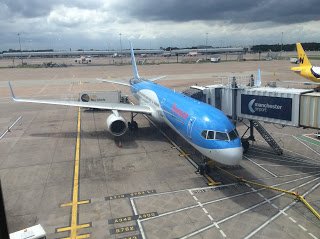 Hi all, James here. Below is a review of what it is like to fly with Thomson, an airline who has won the Best Leisure Airline in the World many times. Enjoy!

We start this report off with the Check-in. Thomson never fails to impress with the check-in as we managed to check-in an hour earlier than expected. We swiftly went through Security and proceeded to the shopping centre of Terminal 2 to get any last essentials before our flight. We then arrive at Stand 210L and we are welcomed by G-OOBE.

We prepare to board our flight and then we enter G-OOBE. I take Seat 28F and settle myself in for the next 4-5 hours. A fantastic position that’s for sure.

A look at the cabin! (See below) A very sleek design with leather seats onboard every seat of the aircraft. The passengers board and get themselves ready for the 4 and a half hour flight down to the Cyprian Island. The aircraft is set up in a 3-3 configuration which can seat 6 people per aisle. The leather seats are definitely very comfortable.

The taxi begins to Runway 23L with a view of the huge control tower as well as some of Manchester’s standard traffic that flies in on a daily basis. From the right hand side of the aircraft, you could see the Aviation Viewing Park also.
As the flight was running slightly behind, the taxi was quite fast to Runway 23L. We crossed held short at holding point D1 at 23R before ATC cleared us to cross for Runway 23L. Thanks to ATC, we didn’t wait long as we by the time we lined up on the Runway, a Thomas Cook Airlines Boeing B767 had already lifted off and the suitable wake turbulence conditions were met. It was time to go!

And we are up! Departed 23L at around 16:10 GMT. A fantastic and smooth departure from the crew as well as a fantastic view of Manchester as we departed. The departure went really quickly as the amazing RB211 Engines roared down the runway and launched us into the skies.

Around 20 minutes later, we achieved our cruise altitude of 37,000 feet. The routing takes us through the Netherlands, Germany, Czech Republic, through most of Eastern Europe before passing over Turkish territory and then the descent will be through the north of the Cyprian Coast towards Paphos. During the climb, it was quite turbulent as we were passing through many layers of cloud. As soon as we got above 30,000 feet, the turbulence stopped and the blue skies of Europe appeared. Below are some images during the cruise over Europe as well as some miscellaneous images inside the aircraft.

With regards to the food, there was a wide range of options to choose from but we didn’t eat any of it as we ate at the Terminal before our departure. Unfortunately, due to the flight being classed as “Short haul”, there was no IFE (In-Flight Entertainment) on board so we had to make do with any apps on the iPad as well as any music or movies we pre-downloaded. But for a person like me who loves looking out of the window for 4 hours, it isn’t so bad. On another note, within Thomson’s fleet, only the long-haul routes have suitable IFE onboard as they have the licensing required to broadcast IFE on long haul routes. On the short haul routes however, they don’t. The only sort of IFE that they had was something on the armrest that lets you switch channels and adjust the volume. (See below)

During the flight, the performance of the cabin crew was top-notch and was consistent throughout the whole flight, offering a wide range of services, drinks and food etc. as we were taxiing down to 23L, they performed their demonstration which was well prepared and co- ordinated and was very informative. As this is my first time on a B752, it helped me out a lot, especially the safety cards. In my personal opinion, I can see why Thomson keeps winning the The Best Leisure Airline from Skytrax. It is because they are consistent in the services that they provide and they cannot be faulted at any point whatsoever.

On a seat perspective, the legroom that we receive is very good and there should be no complaints about. The legroom can easily fit a set of legs as well as a medium sized rucksack. (See below)

Two hours left into the flight and it becomes visible that the sun
is going to go down quite shortly as we get closer to more of the South East of Europe. (See below) The views are absolutely sensational, something you would never see in the UK.

As it gets pitch black, we are at least an hour and a half to touchdown with the flight attendants serving the last beverages and snacks before we initiate our descent into Paphos International Airport. As soon as we descend, it should be at least 20 minutes to touchdown as that is normally how long it lasts. It can be longer depending on whether we get put into a hold or not over the airport due to high levels of traffic. The cabin crew are looking exhausted after a long flight across Europe and look eager to set up for the descent. Can’t blame them really, they do provide an amazing service, so they do have the excuse. At this point, photos are kind of impossible due to the darkness. My iPad hates darkness.

The captain announces the plans for the descent. We have step climbed to 39,000 feet over the Turkish city of Antalya. We will then be descending and making a right turn towards Cyprus. He did say that we will be there 4 minutes late at 20:24 GMT. So overall, the flight crew managed to knock off an extra 2 minutes of the original delay out of Manchester which isn’t too bad. We begin our descent into Paphos moments after the cabin crew announce it. It was a very smooth descent with barely any turbulence. As the beacon flashes, you can see the air brakes being deployed as well as the flaps that will be set up before the final approach phase. The cabin lights suddenly go dark, it is normal procedure when landing at nighttime.

The flaps start to extend and then the thunderous sound of the landing gear comes with it. The sound is just sensational. The thrusts go to idle and we proceed down to our last stage of the descent before we turn onto finals. The flaps extend further and you can feel yourself get thrown back into your seat whilst the speed is reduced. We are now on final approach. The last notch of flaps is extended and then suddenly…. BOOM We touchdown and the reversers kick in! The brakes are kicked in and you are pulled back to your seats. Welcome to Paphos!

So overall it was a great flight, including an awesome bouncy landing at the end. Huge thanks to the Thomson crew on that flight as well as my parents for taking our family here! Remember, stay tuned to AirLive.net for more trip reports from me!