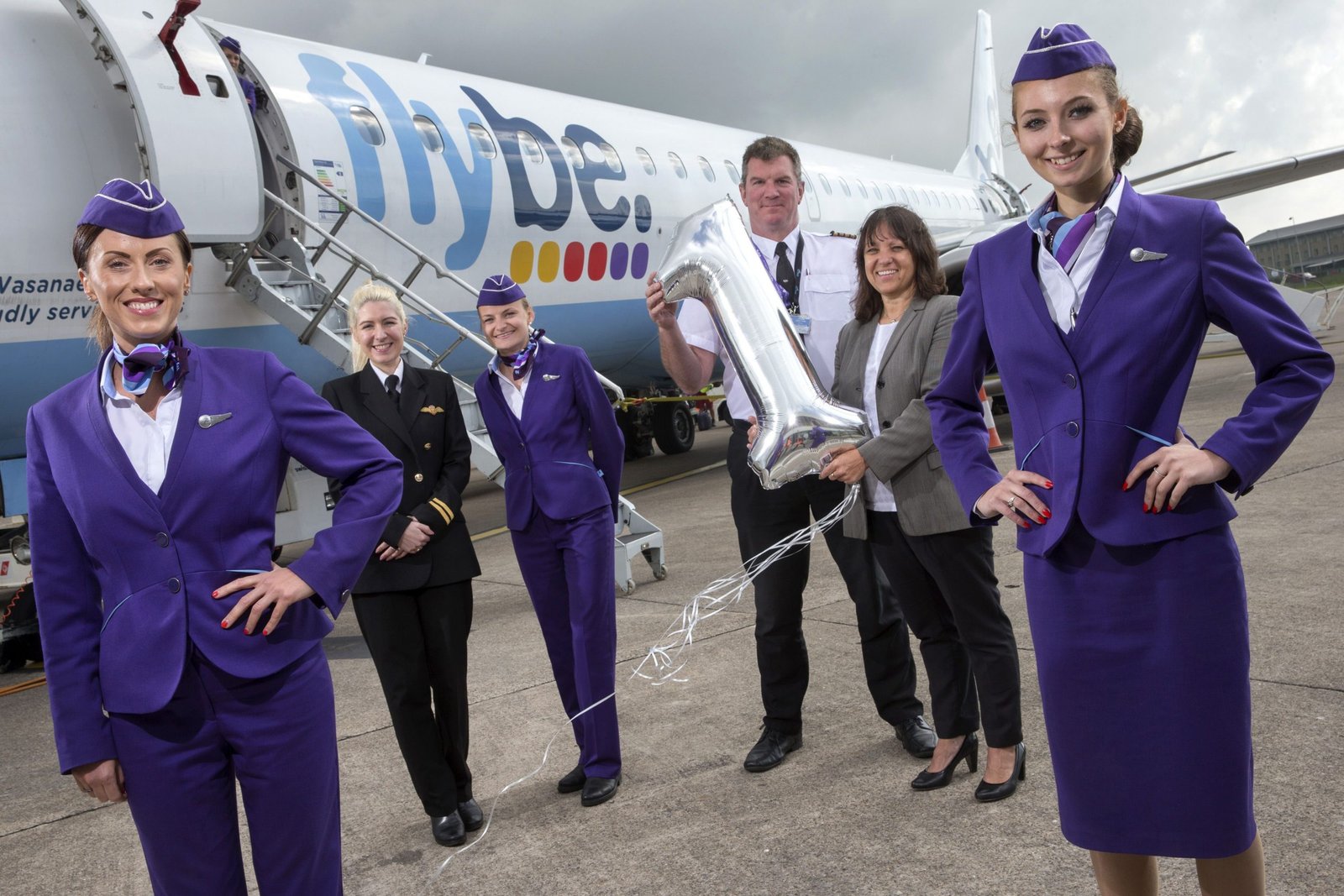 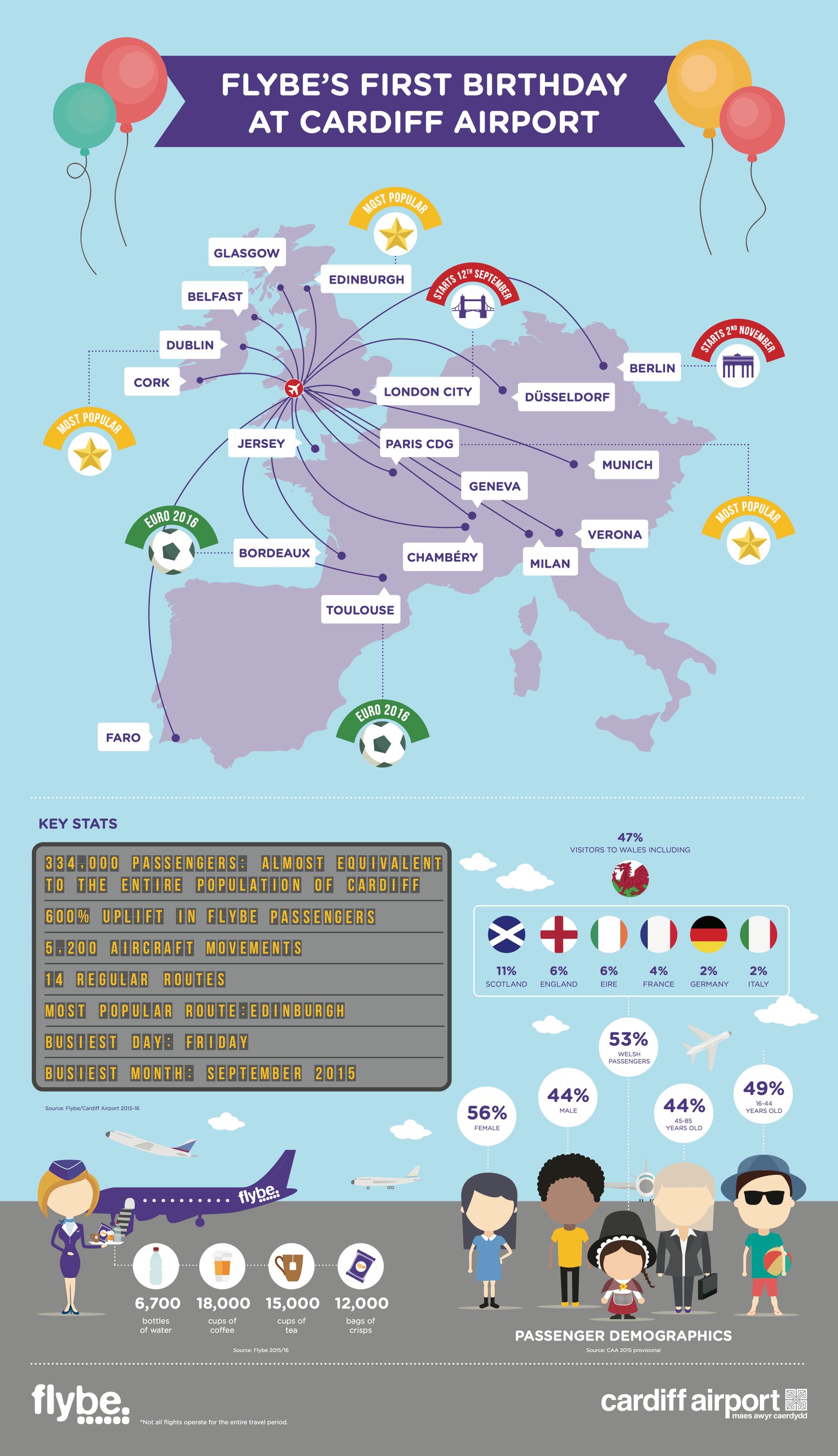 Flybe, Europe’s largest regional airline, is celebrating the first anniversary of opening a two aircraft base at Cardiff Airport.

Figures released show that 334,000 passengers flew with the airline from Wales’ national airport over the last 12 months, equating to a more than 600 per cent uplift in Flybe passenger numbers there over the year-long period; and from which the airline increase its route network from four to 16 destinations by having based two 118-seat Embraer 195 jet aircraft at the airport.

Demonstrating its responsiveness to the Welsh market, Flybe will operate special football flights to Bordeaux, Toulouse and Paris for key Euro 2016 matches and has added Berlin as another new destination to its 2016-17 winter schedule. It has even stepped in to provide ‘rescue flights’ between Cardiff and London City to operate up to four times a day during the Severn Tunnel rail closure, beginning on 12th September this year.

Figures for the past year show that 53% of bookings originated in Wales, meaning 47% of bookers were visitors to Wales.

Flybe’s most popular routes during the first year of its extended operation have been those serving Edinburgh, Dublin and Paris, while the growth of its network has generated more than 50 jobs including pilots and cabin crew.

Cardiff Airport reports that the introduction of the new routes and added capacity has boosted growth and greatly contributed to 12 months’ of consecutive passenger growth. Passenger numbers are now 26 per cent up for the rolling year, that’s just over 1.270 million. Such figures have not been seen since 2011.

Vincent Hodder, Flybe’s Chief Revenue Officer said: “Flybe’s strong performance and increased growth over this first full year of our base operations at Cardiff demonstrates our commitment to the national airport of Wales. We have continued to fine tune our schedule with added frequency and new routes that is testament to our flexibility and responsiveness in meeting customer needs. We are pleased they are happy customers, too! Our research shows high customer satisfaction and strong awareness of the Flybe brand in Wales, with four out of five people knowing that Flybe flies from Cardiff Airport, providing a ‘One Stop to the World’ through numerous opportunities for onward connections both domestically and further afield. We look forward to continued growth and access to faster, convenient and more affordable options for flying direct to and from Wales. Having such choices to travel to and from local regional airports is something we at Flybe consider a necessity, not a luxury.”

Debra Barber, Managing Director and Chief Operating Officer at Cardiff Airport, adds: “Cardiff Airport is a strategic gateway in and out of Wales for thousands of businesses and holidaymakers. Last year was a turning point for the business, and we’re targeting further growth in 2016. The Flybe base, along with the 17 other airlines that regularly make use of our facilities is an important part of this success story, helping to provide more choice and flexibility for customers than ever before. Substantial investment in capital infrastructure projects, including the terminal’s retail and catering outlets, is also helping to improve the customer experience. We’re pleased to be reporting such strong figures for Flybe, results we know will contribute to ensuring the airport is front-of-mind for our customers in the future.