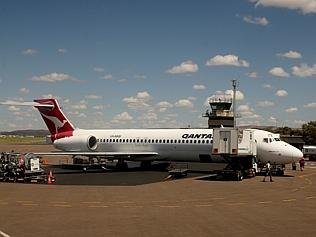 A FUEL release constrained a Qantas plane from Melbourne to make a crisis arrival in sensational circumstances at Hobart International Airport.

Expert flying firefighting trucks encompassed the Boeing 717 air ship after it landed and turned toward the end of the runway and maneuvered back to the terminal soon after 8.30pm on Monday.

A QantasLink representative couldn’t affirm what number of travelers were ready Flight QF1507 from Melbourne, however said the air ship holds 110 travelers.

Hobart man Paul Strommer and his wife were on the Jetstar JQ711 flight from Melbourne which landed just before the Qantas plane and saw the occasion.

“We pulled up to a great degree rapidly,” Mr Strommer said. The Jetstar pilot turned around push vigorously to stop the plane before leaving the runway and off the beaten path of the Qantas flight, he said.

“The pilot apologized to the travelers for the quick draw up saying we were requested that get off the runway.

“It was really marvelous.”

The QantasLink representative said the pilot was cautioned by a glimmering fuel light and said the plane encountered a minor fuel spill towards the end of the flight.

“The flight landed securely at Hobart Airport and our architects are at present evaluating the airplane.

“As a standard safeguard, the airplane terminal flame powers observed the flying machine as it landed. The air ship is relied upon to come back to administration tomorrow morning.”

Designers were looking at the air ship to focus the reason for the blazing fuel light.

The representative said the pilot had asked for need landing when the light began blazing. A need arrival solicitation is made when a plane needs to arrive in front of all other flying machine.

Travelers on the Jetstar flight were left the runway in record time to make space for the crisis.