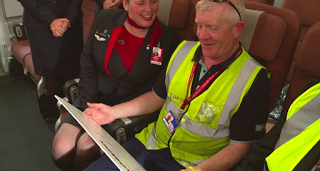 Ian (nicknamed Ginger) was featured on the first episode of ITV’s Heathrow series here in the UK.

The baggage handler said on the show that you would need to win the lottery to go on the Airbus A380 which he was handling at the time of filming.

After the program was watched by employers of Qantas, they gave him the chance of going on their A380 for a trip to Dubai.

The airline first gave him a tour of the A380 while on the stand at Heathrow before returning to Australia before presenting him with a ticket to Dubai.

Ginger said that he had never seen the inside of the aircraft which gave him the chance to go on board.