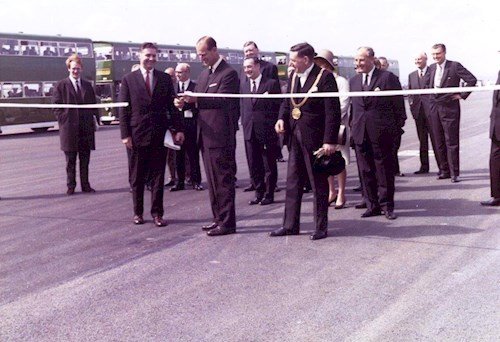 Staff at Liverpool John Lennon Airport have celebrated a milestone this weekend with the 50th Anniversary of the opening of the Airport’s runway. Whilst the Airport itself opened in July 1933, the runway used today at the Airport was officially opened on 7th May 1966.

Over the past 50 years the runway has handled in excess of 3.5 million landings and take-offs and whilst popular commercial passenger aircraft used by the growing number of airlines who operate from Liverpool make up the bulk of today’s users, there has been a diverse mix of aircraft using the runway too. These have included one of the world’s largest aircraft – the Russian Antonov 124, the world’s fastest commercial airliner – Concorde, and perhaps the world’s best loved display team – The Red Arrows.

Until the opening of the new runway, aircraft used to operate from runways located adjacent to the old airport terminal building which is now the Crowne Plaza Hotel, on land since redeveloped to become the Liverpool International Business Park. Work started in November 1964 to construct a 7,500 ft state of the art new runway on land to the south of the then existing airport, at a cost of around £3 million and took 18 months to complete.

The Duke of Edinburgh came to the Airport to perform the official opening 50 years ago cutting the ribbon on the runway. The runway has since undergone a £22m major refurbishing and upgrading in 2007 to ensure that it can continue to handle all kinds of aircraft large and small for years to come.

Today’s runway is operational 24 hours a day, 7 days a week, with an average of around 170 take offs or landings each day and closing only for Christmas Day when no flights are scheduled to operate. Its location and direction also brings operational benefits too with it being less susceptible to poor weather conditions that can impact on aircraft movements.

Helping to celebrating the milestone were two members of staff who were born the year the runway opened and who will shortly also be celebrating their own 50th birthdays too. Carol Dutton, the Airport’s HR Director joined Gary Collins one of the Airport’s Rescue & Firefighting Service Crew Managers, out on the runway between aircraft movements.

Robin Tudor, LJLA’s Head of PR commented, “The runway here at the airport is perhaps our most important asset and deserves to be celebrated. Millions of passengers will have started or ended their journeys on it and we look forward to welcoming all sorts of aircraft using it over the next 50 years.”