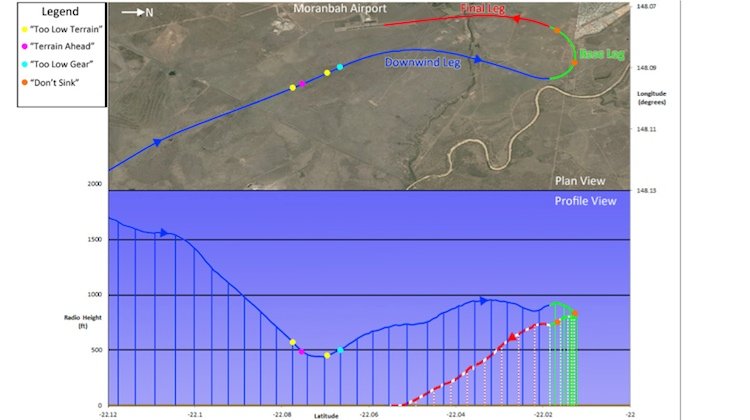 The ATSB discovered the under-reporting while looking into an incident on May 13 2013, when multiple terrain warnings were triggered on board VARA ATR 72 VH-FVR during an approach to Moranbah Airport.

The captain and first officer had decided to descend rapidly from 1,500ft above ground level to remain clear of cloud in the area. Some 30 seconds into the descent, the ATR 72’s terrain awareness warning system (TAWS) activated with four aural alerts – starting with “Too Low Terrain” and followed by “Terrain Ahead”, “Too Low Terrain” and finally “Too Low Gear” – in a 12 second period as the aircraft levelled to an altitude of 440ft. The ATSB report said the recorded average vertical descent speed during the descent from 1,500ft to 440ft above ground level – the lowest recorded height before the crew initiated a climb – was 1,750 ft/min. There were two more TAWS alerts later in the approach, before the aircraft made a normal landing.

The ATSB said it examined whether there was a potential issue with the TAWS and ground proximity warning system (GPWS) fitted on the ATR 72 and conducted a search of its database to determine the number of alerts reported for the ATR 72 in the previous 12 months.

It found VARA’s rate of TAWS/GPWS notifications was “disproportionately lower” than those of the other operator/aircraft model combinations and it was only when the records from both VARA and the ATSB were consolidated that the airline’s reporting rates became consistent with other similar turboprop operators in Australia.

“There was a significant under reporting by Virgin Australia Regional Airlines Pty Ltd of ATR 72 terrain awareness warning system-related occurrences,” the ATSB said.

“Action was taken by VARA to ensure that in future all TAWS/GPWS notifications were reported to the ATSB.”

In response to the incident, the ATSB said VARA had provided additional guidance to crew regarding the reporting of all GPWS/TAWS occurrences and changed its internal reporting procedures. VARA had also added the processes for reporting terrain warning events to the flight operations policy and procedures manual, while supporting internal processes had been developed to ensure all reports were reviewed by the safety department and passed to the ATSB as applicable.

“The increased reporting rate from the airline indicates that these changes have addressed this issue,” the ATSB said.

Incidentally, VH-FVR is also the subject of another ATSB investigation after suffering suspected “significant structural damage” on a flight from Canberra to Sydney. VH-FVR was grounded in Albury from February 2014 until November that year, when it was ferried to Singapore. The aircraft is now back in service with VARA.