It wasn’t until 10:30 a.m.—more than nine hours after the plane vanished—that Defense Minister Hishammuddin Hussein was informed that military radar had tracked the plane turning west toward the Indian Ocean. Mr. Hishammuddin then told Prime Minister Najib Razak.During that stretch, according to the chronology released Thursday, Malaysian and Vietnamese traffic controllers had more than a dozen separate exchanges wondering about the location of the plane and its possible flight path, without any resolution or commencement of a search.The documents were released on the orders of Mr. Najib in an attempt to bring greater transparency to the search for the missing plane.The documents lend support to the suspicion that someone intentionally diverted the plane as it crossed from Malaysian to Vietnamese airspace, but offer no new information on what occurred in the cockpit as the plane veered sharply off its flight plan.They included two maps of the route the plane is believed to have taken, indicating that it flew over the tip of the Indonesian island of Sumatra.Indonesia, however, has maintained that its radar didn’t detect the plane in its airspace.Agus Barnas, spokesman for Indonesia Coordinating Ministry for Legal, Political, and Security Affairs, said Thursday that two military radar stations in northern Sumatra operate 24 hours a day and would have detected the plane.”It’s impossible that we didn’t know if the plane crossed the area,” Mr. Barnas said.The documents also included a two-page summary of air-traffic controllers’ conversations, the plane’s cargo manifest, the seating chart and audio recordings of five conversations between flight controllers and the cockpit. The documents provide the most comprehensive look yet at what authorities have known for weeks about the plane’s disappearance.More than seven weeks into what has been a fruitless search for remnants of Flight 370, the maps don’t clear up questions about the jet’s altitude during most of its flight. They also highlight the wide range of speed assumptions investigators used to identify where the jet most likely went down in the Indian Ocean.Next week, international aviation experts and investigators are planning to meet privately in Canberra in an attempt to further refine estimates of where the plane likely crashed, according to a person familiar with the investigation. The experts, including a panel of air-crash investigators and officials from Boeing Co. and satellite operator Inmarsat PLC, will collectively examine closely guarded military radar data to see whether any new conclusions can be drawn, the person said.According to the maps released Thursday, investigators calculated the probable area where the plane ran out of fuel based on speeds ranging from about 323 knots to 350 knots. Depending on altitude, that difference could amount to as much as a 716-nautical-mile gap between the “highest-probability area” for wreckage, versus the “lowest” and “mid-probability” areas.During the last few minutes of the flight before the jet presumably ran out of fuel, the international team of investigators assumed the plane most likely was flying at an altitude of 30,000 feet. But another possible route on the map assumes it was at 15,000 feet.Once they realized that the Malaysia Airlines aircraft had gone missing, air-traffic controllers in Vietnam and Malaysia spent hours trying to figure out where the plane was, raising questions about whether their counterparts in Cambodia, Singapore, Hong Kong and mainland China had any contact with the jet.One controller asked the crew of another Malaysia Airlines jet to raise Flight 370 on an emergency radio frequency.Meanwhile, a Malaysian military radar operator noted that a northbound commercial airliner had turned sharply west over Malaysia. Military radar tracked the plane as it flew for 30 to 40 minutes over the country but the operator didn’t alert his superiors because it posed no threat.Among the documents was a preliminary investigative report submitted earlier to the International Civil Aviation Organization, which Mr. Najib pledged last week to release in an interview with The Wall Street Journal.The Boeing 777 disappeared March 8 after taking off from Kuala Lumpur to Beijing with 239 people aboard. Based on satellite data, authorities believe the aircraft ended up in the Indian Ocean. No trace of it has been found.Malaysia has been widely criticized, particularly by relatives of passengers, for not being more forthcoming in providing information about the missing plane.The aircraft ended communication with air controllers at 1:19 a.m. in Kuala Lumpur but didn’t engage with the next control tower in Ho Chi Minh City, Vietnam, as it should have. Moments later, the plane turned west.”It might be a coincidence, but if you are choosing the one moment in the flight to go dark, that’s the moment,” said one person familiar with the investigation. “If it is just a mechanical failure, it is an extraordinary coincidence.”It wasn’t until 1:38 a.m.—19 minutes later—that controllers in Ho Chi Minh City realized they hadn’t heard from Flight 370 and raised the alarm.Controllers in the two cities communicated back and forth over the next 25 minutes. The Malaysia Airlines operations center then weighed in with information that the plane was in Cambodian airspace.At 2:15 a.m., a Malaysia Airlines representative informed the Kuala Lumpur air-control center “that MH370 was able to exchange signals with the flight and flying in Cambodian airspace.”Kuala Lumpur questioned whether the plane was supposed to travel through Cambodian airspace; Ho Chi Minh City replied that the planned route was only through Vietnamese airspace.Over the next few hours, air controllers broadened their search to include Singapore, Hong Kong and Beijing.Only at 5:30 a.m. did the Kuala Lumpur watch commander initiate search and rescue efforts. The search began in the South China Sea.After Mr. Najib was notified that the plane was lost, he ordered that a search also begin in the Straits of Malacca, Mr. Hishammuddin said.The report submitted to the ICAO contains one recommendation: that the U.N. agency consider the safety benefits of real-time tracking for commercial aircraft.—Daniel Stacey, Andy Pasztor and Joko Hariyanto contributed to this article.Richard Paddock 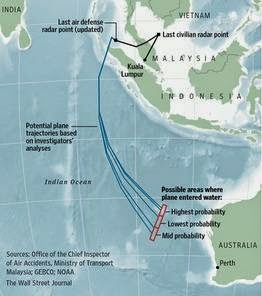