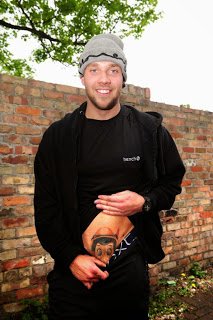 Tom Washington, 22, of Grimsby, boarded the Jet2 flight dressed up as a female cabin crew member for the lads’ holiday to Majorca.

He explained: ‘There were 23 of us altogether and we all met at East Midlands airport.

‘We got up in the early hours to do our make-up and hair like any presentable woman. We were all excited and sober at this point, and we got on to the plane with barrels of laughter from pretty much everyone – the airport staff and members of the public.

‘I got up but because my jacket was too tight, it exposed my chest which I had covered with a bra.

‘I then proceeded to help the cabin staff with the safety talk using a sex toy.’

He continued: ‘There were some old men on the plane as well and they were a laugh.

‘The lads mentioned I had a tattoo of Pinocchio, which I showed them, and that was the point where the manager took my passport.’

Steve Heapy, CEO of Jet2.com and Jet2holidays, said: ‘We carry millions of families every year so this disgusting behaviour will not be tolerated.

‘It is totally unacceptable.

‘We pride ourselves on giving our customers a friendly and relaxing flight experience so we will take action against anyone who causes offence and disruption to our crew and passengers.’