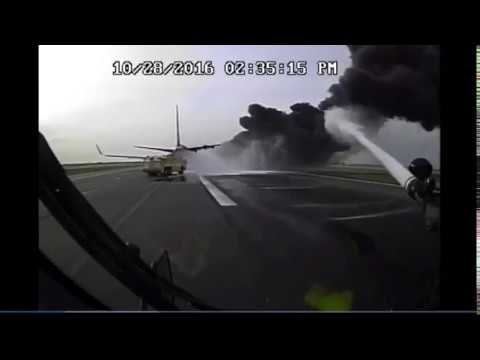 Newly released video of a jetliner that caught fire at O’Hare International Airport last fall shows flames shooting from the right engine and engulfing the entire side of the plane as it rolls down the runway.

The pilot of American Airlines Flight 383 aborted the takeoff, and the 161 passengers and nine crew members were evacuated. No one was killed, but at least 20 people were injured as they slid down emergency chutes on the side of the plane that wasn’t burning.

The video, taken from the airport tower, shows the Boeing 767 picking up speed on Runway 28R around 2:30 p.m. Oct. 28, bound for Miami. The first sign of trouble is light gray smoke streaming down the right side of the plane. The engine explodes into flames, and black smoke billows from the jet.

The pilot immediately braked the plane, which was traveling around 150 mph and was seconds from lifting off, officials said.