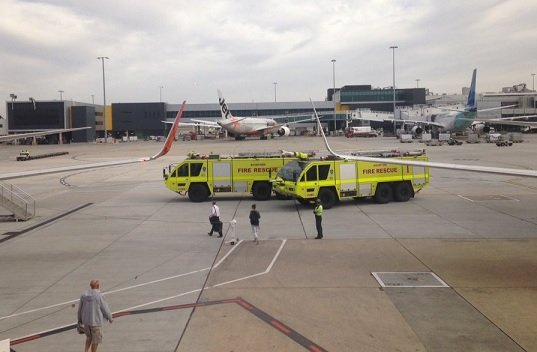 The ARFF we’re called to attend the incident at Melbourne (Tullamarine) Airport at around 8:15am this morning.

A Virgin Australia spokeswomen said: “The captain decided to return to the gate at Melbourne Airport in accordance with standard operating procedures after a minor fuel leak,”

A Melbourne Airport spokeswomen said: “Everything is fine, no need to panic” She later confirmed that the fuel leak at been contained

The aircraft was shutdown completely by engineer’s to stop the fuel leak.

Passengers did not evacuate the aircraft but instead they were simply told to leave the aircraft, no emergency procedures were performed for getting the passengers off. Another aircraft was brought to the terminal in replacement with faulty aircraft.

The aircraft was believed to be a Virgin Australia Boeing 737-800 registered VH-YFP.

The aircraft was later towed to the maintenance bays on the south side of the airport.