NEWS: Pilot breaks door of toilet down with an axe. 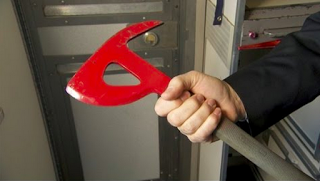 A
NextJet pilot has used an axe to get a drunk passenger out of a bathroom.

The
incident happened in Sweden when the passenger failed to come out of the
toilet when instructed by cabin crew.
The pilot, wielding an axe proceeded to
break the door down.
The incident happened Wednesday night on
the NextJet ATP propeller plane from Stockholm, which later landed safely in
the eastern city of Örnsköldsvik at around 8 p.m. local time after the
incident.
More details here
Category: NewsBy admin4493August 6, 2015
Share this post
Share on FacebookShare on Facebook TweetShare on Twitter Share on WhatsAppShare on WhatsApp Share on LinkedInShare on LinkedIn