A 13-minute takeoff delay caused so much tension between two Air New Zealand pilots that the first officer was locked out of the cockpit on a flight between Perth and Auckland.On May 21, flight NZ176 was delayed after the first officer was asked to undertake a random drug and alcohol test. This was enough to enrage the captain, for whom timeliness was a matter of great pride.Crew on board the packed Boeing 777 became concerned when the captain did not respond to three requests to open the cockpit door. The first officer then entered the cockpit by an alternative method, which was not disclosed for security reasons.Both pilots have been stood down over the incident and will be subject to additional training and counselling.An unnamed expert told the NZ Herald two minutes is “an eternity” on board a flight.Aviation commentator Peter Clark called on airlines to put at least three people in the cockpit so no-one is ever alone at the flight deck.”After [the disappearance of Malaysia Airlines flight] MH370 there’s definitely questions being asked about whether there should be more than two people on the flight deck,” he said.New Zealand’s Civil Aviation Authority said it was satisfied with a report on the incident provided by Air New Zealand.”Both pilots have learned a valuable lesson around the need to communicate better with peers,” Air New Zealand’s operational integrity and safety manager Errol Burtenshaw told the NZ Herald.According to Mr Burtenshaw, the captain did not open the door because he was approaching a navigational waypoint and thought it was a member of the cabin crew – rather than his co-pilot – attempting to enter the cockpit.Commercial flights are typically piloted by a captain and a first officer, but may also include a flight engineer, check captains and other staff. In May last year, an Air India jet made an emergency landing after the captain was locked out during a toilet break and crew could not re-open the cockpit door. 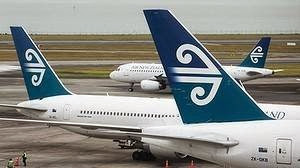