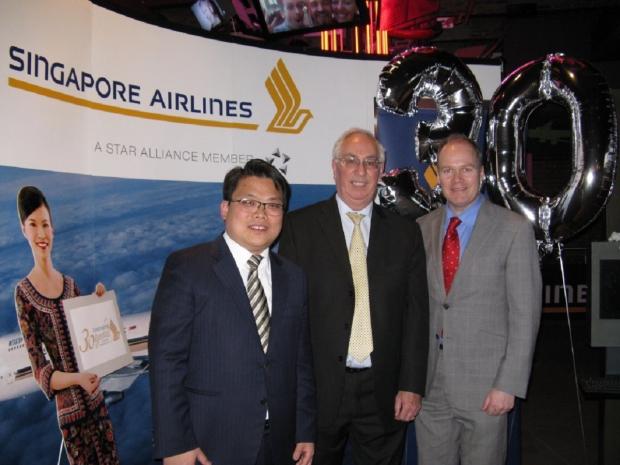 In 1986, the route was flown by the airline’s popular Boeing B747-300 aircraft 2x per week and is now operated by their new Boeing B777-300ER (Extended Range) aircraft daily. The Boeing B777-300ER aircraft features a new Premium Economy Cabin and connects via Munich before heading to Singapore.

Singapore Airlines general manager for UK and Ireland, Wilson Yong, said: “This marks the 30th anniversary of what is a great relationship between our customers in the North England and our partnership with Manchester Airport and we are looking to building on our long standing support for this service.”

Patrick Alexander, head of marketing from Manchester Airport, said:“With our catchment area of 22 million people and our passenger throughput of 23.3m passengers annually we are pleased to offer the daily service that Singapore Airlines provides with its world renowned on board service.”

Ken Garraty, the director of Ken Garrity Travel Altrincham was one of the many few invited to the airline’s anniversary with the airport. He saw the inaugural service land in 1986 and flies with the airline many times. He said: “I have supported this service since its first days and pleased to see how well it has done. The new aircraft are fitted with business class, the new Premium Economy seats as well as economy. My clients enjoy the service on board which is second to none ,with the famous Singapore Girl in her Sarong Kebaya uniform designed by Pierre Balmain.”