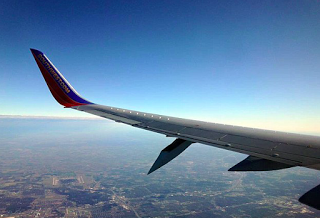 A plane was forced to make an emergency landing when a piece of the wing ‘fell off’ mid-flight.
One passenger on the Southwest Airlines flight from from Austin to Harlingen in Texas, U.S. took a photo of the wing from his seat that the airline have said was at ‘an irregular angle.’
The Boeing 737 made a safe landing at San Antonio Airport and the 109 people on board were disembarked safely.