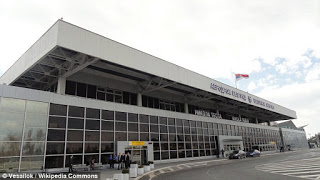 A Turkey-bound flight was forced to make an emergency landing after an Irishman stripped off and attempted to have sex with a stewardess.

The man, who has been identified by the Serbian Interior Ministry as an Irish resident, boarded the Sun Express flight from Dublin to Izmir with a large group of friends on Saturday.

But as the plane took off, it is alleged the man began stripping off, before taking off his underwear and starting to wave his penis around. He then demanded sex with the horrified crew, it is claimed.


When they refused and tried to calm him down, the man reportedly became aggressive and started jumping on the seats – all the while being cheered on by his friends, according to fellow passengers.

The plane made an emergency landing at the Nikola Tesla airport in Serbian capital Belgrade,