NEWS The rapid rise of low-cost carriers in Europe 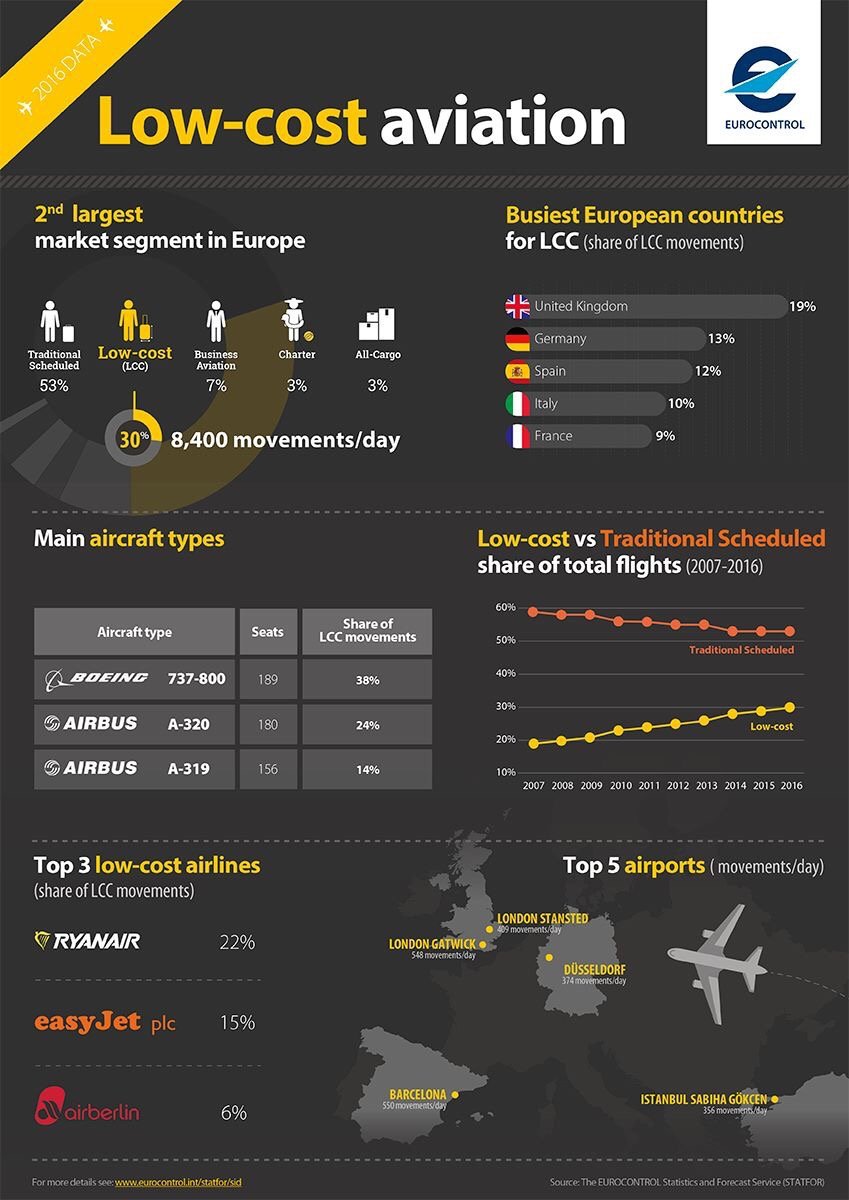 Low-cost carriers (LCC) have become a popular alternative to traditional scheduled airlines over the last two decades. As the summer holiday season has arrived, we look at the low-cost market segment, the changes in its business model, and how it has expanded in the last 10 years.

The low-cost model focuses on business and operational practices that reduce airline costs. That means using secondary airports (with lower taxes), offering no frills on the flight and charging for services like seat reservation and checked-in baggage.
LCC typically used to fly short-haul routes so that they could return to their home base at night, and thus avoid hangarage and other costs. However, this is gradually changing; for instance, low-cost airline LEVEL (from the IAG Group) has started long-haul flights from Barcelona to North and South America.

Moreover, while sticking to single-aisle aircraft this market segment has a preference for aircraft with more seats (median of 150 seats vs 137 seats for the traditional scheduled segment) and usually a single aircraft type (e.g. Ryanair: B737-800 aircraft), which helps lower MRO (maintenance, repair, overhaul) costs and improves crew flexibility.

Business models are adapting in both directions. For example, low-cost airlines are increasingly flying from major airports to attract customers from the traditional scheduled airlines, and even Ryanair is now experimenting with connections. Meanwhile, traditional scheduled carriers are increasingly unbundling their offers like low-cost: selling food, seat choice and checked baggage separately.

But despite the fierce competition between the two market segments, there has also been cooperation. That is the case of Ryanair which started a flight partnership with Air Europa, allowing its customers to book Air Europa long-haul flights on its website.

An overview of low-cost growth

A good way to measure the success of the low-cost segment is to compare it to its main competitor – Traditional Scheduled, the full service airlines or network carrier. This market segment also files as ICAO flight type ‘S’.

LCC has been the fastest growing market segment, to the detriment of Traditional Scheduled. From 2007 to 2016, low-cost flights grew by 61% (from 5,200 flights per day to 8,400 flights) whereas traditional scheduled flights were down 10% (from 16,300 flights per day to 14,700 flights). This includes some direct transfer of flights to low-cost subsidiaries. At times, LCC was also the only sector growing in periods of economic and political uncertainty. 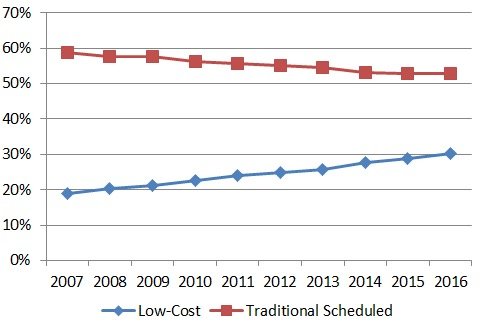 The five European countries with most low-cost traffic are the United Kingdom, Germany, Spain, Italy and France. However, Spain (excluding the Canary Islands) is the only country where LCCs are more popular than traditional scheduled; in the other countries, the traditional scheduled segment is still in the majority. 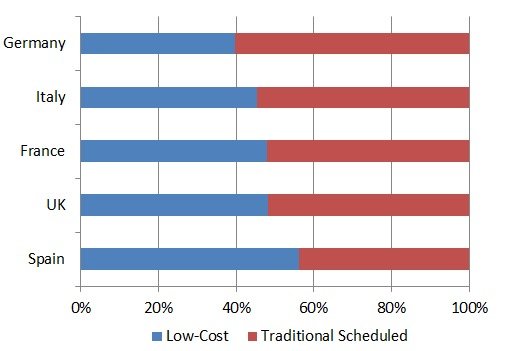