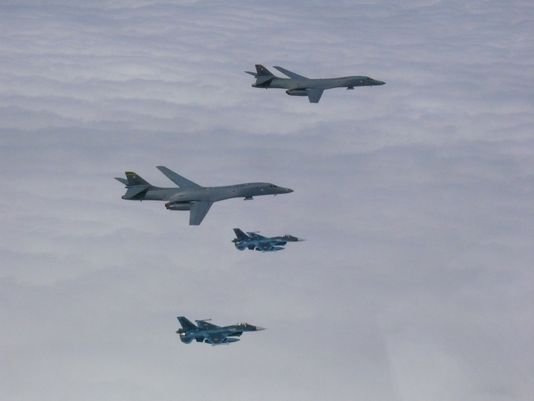 As tensions mounted between the United States and North Korea, two B-1B Bombers from Ellsworth Air Force Base participated in a flight off the Korean Peninsula.

The bombers are among six B-1B Lancers and 350 airmen from Ellsworth AFB that were deployed to Guam in July as part of the rotation for the U.S. Pacific Command’s Continuous Bomber Presence mission. North Korea has indicated that Guam could be a possible target for its missiles in the event of hostilities.

The B-1 is a long-range bomber with a payload of up to 75,000 pounds, the largest of conventional aircraft in the U.S. Air Force. The two that flew over the Korean Peninsula were joined by fighter jets from the Republic of Korea and Japan, according to an Air Force press release.

“Aircrews, maintenance and support personnel, will continue generating B-1 bomber sorties to demonstrate the continuing U.S. commitment to stability and security in the Indo-Asia-Pacific region, providing commanders with a strategic power projection platform and fulfilling the need for anytime mission-ready aircraft, an important part of national defense during a time of high regional tension,” the release said.

The mission comes as reports emerge that North Korea has the ability to pair nuclear warheads to its missiles. President Trump on Tuesday vowed that the country would be treated to “fire and fury like the world has never seen” in the event of war.