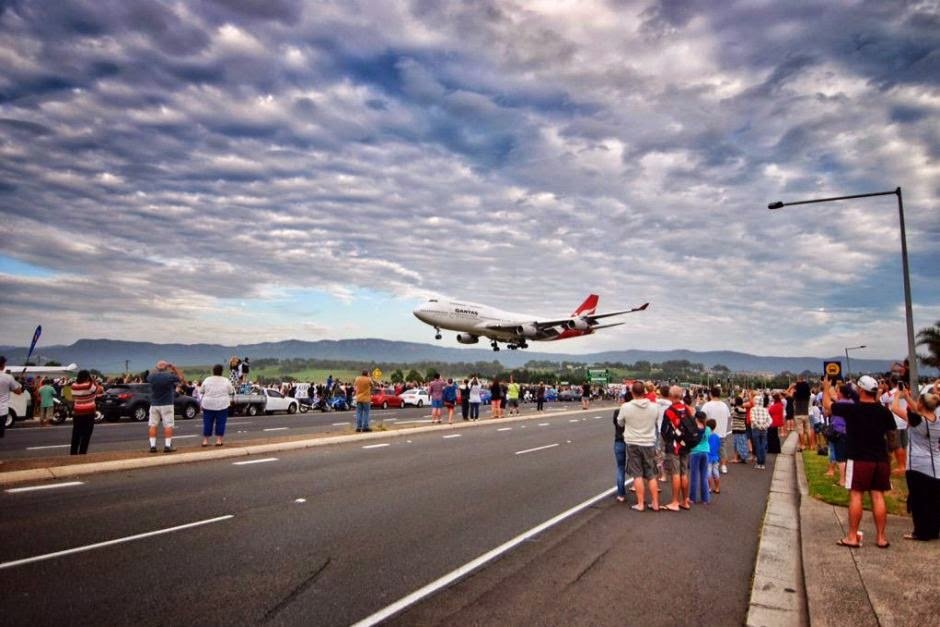 The weather was near-perfect as the landing gear of the venerable Qantas 747-400 touched down in picturesque Illawarra this morning, the sight an absolute delight to all who were there.
Video of the approach shows the slow and steady descent made by the jumbo jet as it performed its touchdown, and the spectacular reduction in speed from over 200km/h to nil on the short runway just 1819m long.
QF-7474, as the flight was known, was the delivery flight of Qantas’ original and most loved 747-400, designated VH-OJA but also known as the “City of Canberra”.
In 25 years of service, OJA has transported millions of passengers to locations around the world, however just four senior Qantas captains accompanied the distinguished aircraft on its final journey to the headquarters of the Historical Aircraft Restoration Society (HARS), where it will soon be placed on display for the public to see.
Under the command of Captain Greg Matthews, the mammoth aircraft took all of 15 minutes to travel from Sydney Airport to the much smaller Illawarra Regional Airport, however the flight was perhaps the most important, and certainly the most publicised, since its original delivery from London to Sydney in 1989.
That first flight made headlines globally for breaking long-held distance records. Destinations as far away as the United Kingdom no longer seemed so far away any more.
Today’s flight crew, with a combined total of 50,000 hours of flying experience, had previously completed close to 100 simulated flights from Sydney to Illawarra in Qantas’ advanced flight simulators prior to the real thing.
Several complexities in today’s landing, such as the reduced runway length and runway width, were expertly and professionally handled by the veteran flight crew, who in all respects made the challenging approach and landing rollout look easy, even without the aid of an Instrument Landing System (ILS).
Qantas was well prepared on the ground for the delivery of the first 747-400 to an aviation museum anywhere in the world, having pre-delivered equipment such as tugs, towbars and even a mini air traffic control setup to communicate with the aircraft as it approached the small airfield.
This is not the first time Qantas has pulled off a challenging landing like this – in 2002, the airline delivered a 747-200 model aircraft to Longreach Airport in Queensland, the location of the first operational centre for Qantas during the 1920s.
Via: ABC News, Nine News
March 8, 2015
Share this post
Share on FacebookShare on Facebook TweetShare on Twitter Share on WhatsAppShare on WhatsApp Share on LinkedInShare on LinkedIn