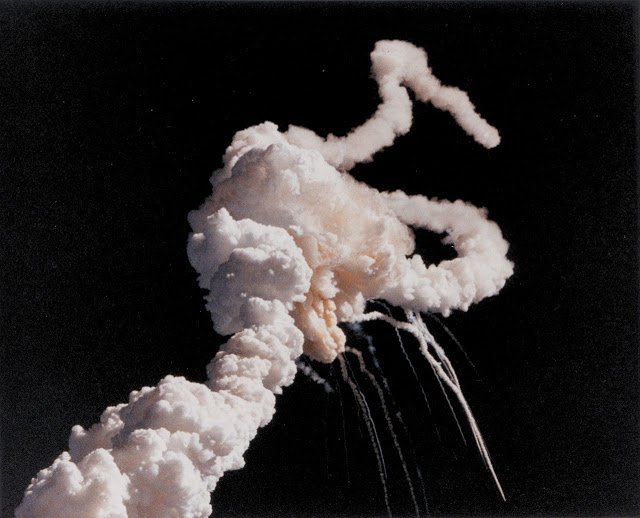 30 years ago today, STS-51-L  was the 25th flight of the Space Shuttle program and the disastrous 10th mission of Space Shuttle Challenger. The mission launched from Kennedy Space Center in Florida on January 28, 1986. Space Shuttle Challenger launched for the first time on mission STS-6 on April 4, 1983. It launched and landed nine times before breaking apart 73 seconds into its tenth mission STS-51-L. Her three main engines were ignited at T-6.6 seconds and at T-0 the solid rocket boosters were ignited, lifting the shuttle stack off the launch pad 39-B at Kennedy Space Center. Almost immediately, cameras recording the launch registered the presence of smoke at the field join next to the attachment strut on the right-hand SRB, indicating the failure of the O-Rings that were supposed to seal the joint against the ‘blow by’ of hot gases from the boosters. However, sometime at around T + 2 seconds, a piece of solid fuel from inside the booster moved inside the joint and provided a temporary seal against the blow-by and as such the launch proceeded normally for around forty seconds after launch.
At around T+36 seconds and an altitude of just over 10,000ft, Challenger experienced the strongest wind shear ever felt by a Space Shuttle launch. The pitch and yaw commanded by the shuttle’s computers in order to counter this wind caused the solid fuel plug to become dislodged from the field joint on the right SRB. At around T+58, cameras noted the creation of the plume on the aft attachment strut on the right-hand SRB – ignited gas had begun to force itself through a rapidly growing hole in the field joint. Within a second, the plume became well defined and intense. Internal pressure in the right SRB began to drop because of the rapidly enlarging hole in the failed joint. At T-60, there was visual evidence of a flame coming through the joint and impinging on the external tank.
At T+64 seconds, the plume suddenly changed shape, showing that it had burned a hole in the liquid hydrogen tank in Challenger’s ET, causing the tank to leak. The pressure in the tank began to drop, whilst meanwhile, Challenger’s onboard computers began to pivot the nozzles of the SSMEs in order to counter the now-unbalanced thrust between the two SRB’s.
At T+68, the CAPCOM informed the crew that they were ‘GO at throttle up” and Commander Dick Scobee confirmed the call. His response, “Roger, GO at throttle up,” was the last communication from Challenger. At around T+72, the right SRB apparently pulled away from the aft strut attaching it to the external tank. Later analysis of telemetry data showed a sudden lateral acceleration to the right at T+72.525, which may have been felt by the crew. The last statement captured by the crew cabin recorder came just half a second after this acceleration when Pilot Michael J. Smith said “Uh oh.” Smith may have been responding to onboard indications of main engine performance or to falling pressures in the external fuel tank.
At T+73.124, the aft dome of the liquid hydrogen tank failed, producing a propulsive force that pushed the hydrogen tank into the liquid oxygen tank in the forward part of the external tank. At the same time, the right SRB rotated about the forward attach strut and struck the intertank structure. At T+73.162 and at an altitude of 48,000ft space shuttle challenger began to break up. With the external tank disintegrating, Challenger veered from its correct attitude with  respect to the local air flow and was immediately torn apart by abnormal aerodynamic forces resulting in a load factor of up to 20g – well over its design limit. The two SRBs, which can withstand greater aerodynamic loads, separated from the ET and continued in uncontrolled powered flight for another 37 seconds. The SRB casings were made of 12.7 millimetres (0.50 in) thick steel and were much stronger than the orbiter and ET; thus, both SRBs survived the breakup of the space shuttle stack, even though the right SRB was still suffering the effects of the joint burn-through that had set the destruction of Challenger in motion. The boosters were destroyed by the range safety system at around 110 seconds after launch.
Millions of people from around the world witnessed the Space Shuttle Challenger disaster on TV.
The accident resulted in a 32-month hiatus in the shuttle program and the formation of the Rogers Commission, a special commission appointed by United States President Ronald Reagon to investigate the accident. It found that the Challengers accident was caused by a failure in the O-rings sealing a joint on the right solid rocket booster, which allowed pressurized hot gases and eventually flame to “blow by” the O-ring and make contact with the adjacent external tank, causing structural failure. The failure of the O-rings was attributed to a faulty design. Whose performance could be too easily compromised by factors including the low temperature on the day of the launch.
Article By: @AirCrashMayday
Categories: History, SpaceBy admin4493January 28, 2016
Share this post
Share on FacebookShare on Facebook TweetShare on Twitter Share on WhatsAppShare on WhatsApp Share on LinkedInShare on LinkedIn