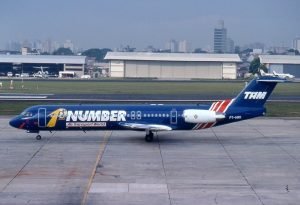 At 8:25 TAM Flight 402 received clearance for takeoff from Runway 17R. Wind was given as 060 degrees. At 8:26 the throttles were advanced for takeoff power. Ten seconds later double beep was heard. The captain said “O auto-throttle” and the co-pilot adjusted the throttles manually and informed the captain: “thrust check”. With this information, he confirmed that the takeoff power had been adjusted and verified. 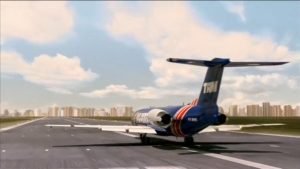 At 8:26:19 the aircraft accelerated through 80 kts. The co-pilot then indicated “V one”. Two seconds later the aircraft rotated at a speed of 136 kts. The aircraft was climbing at an angle of 10 degrees. At that same moment, a shock was felt and the EPR of engine no.2 dropped from 1.69 to 1.34, indicating the loss of power. In fact the no.2 engine thrust reverser had deployed. 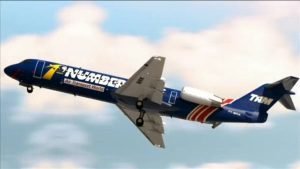 The loss of power on the right side caused the plane to roll to the right. The captain applied left rudder and left aileron to counteract the movement of the plane. The co-pilot advanced both thrust levers, but they retarded again almost immediately, causing the power of the no.1 engine to drop to 1.328 EPR and engine no.2 to 1.133 EPR. Both crew members were preoccupied by the movement of the throttles and did not know that the thrust reverser on the no.2 engine had deployed. The throttles were forced forward again.

At 8:26:44 the captain ordered the autothrottle to be disengaged. One second later the no.2 thrust lever retarded again and remained at idle for two seconds. The airspeed fell to 126 kts. At 8:26:48 the co-pilot announced that he had disengaged the autothrottles. He then jammed the no.2 thrust lever fully forward again. Both engines now reached 1.724 EPR. With the thrust reverser deployed, the airspeed declined at 2 kts per second. 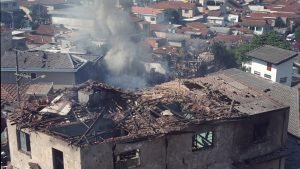 At 8:26:55 the stick shaker activated, warning of an impending stall. The aircraft rolled to a 39 degree bank angle and the GPWS activated: “Don’t sink!”. Seven seconds later the aircraft impacted a building and crashed into a heavily populated neighbourhood in São Paulo. All 96 on board were killed & 3 on the ground.

The investigation into the fatal accident of TAM Transportes Aéreos Regionais Flight 402 was led by Brazil’s Aeronautical Accidents Investigation and Prevention Center & The National Transportation Safety Board (NTSB). 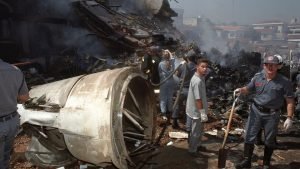 They concluded that a faulty mico-switch in conjunction with a possible short circuit caused the right engine’s thrust reverser to deploy. The imbalance of power resulted in the aircraft rolling and veering to the right as it was climbing away from the runway. The system automatically moved the thrust control to reduce power so the aircraft can climb out safety on the full power of the one unaffected engine there is no warning that the thrust reverser had deployed & the flight crew had not been trained for such an occurrence as the aircraft’s manufacturer, Fokker had judged the failure mode to be so remote a possibility that training for recovery was not necessary.

The safety system cable, responsible for pulling the power lever to the idle position, no longer able to withstand the physical strain of being pulled one way by the actuator, and being pulled the other way by the throttle lever being forced to the fully open position, parted at a maintenance connection. With the lever no longer restrained by the safety system, the co-pilot continued to hold the right throttle fully open. The combination of the right engine at full thrust in reverse and the left engine still at normal forward takeoff thrust, caused the aircraft to descend into the ground.