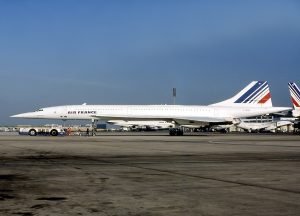 Concorde (F-BTSC) taking off from Nice, France in 2000 (2 months before the fatal accident).

Most of the passengers on board were German. The flight was chartered by German company Peter Deilmann Cruises. The passengers were on their way to board the cruise ship MS Deutschland in New York City for a 16-day cruise to Manta, Ecuador. 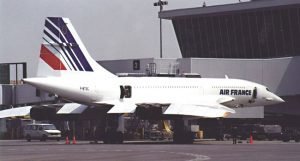 Departure was delayed by about one hour because the crew had requested a replacement of the thrust reverser pneumatic motor of the no.2 engine. Also the rear bogie truck of the left hand main undercarriage was replaced.

When all 100 passengers had boarded, the plane taxied to runway 26R. Takeoff weight was calculated to be 186,9 tons, including 95 tons of fuel, which is one ton over the maximum takeoff weight.

A Japanese passenger inside an Air France Boeing 747 which had just landed from Japan, and was waiting to cross Concordes runway on its way back to the terminal. He happened to be taking photographs of Concordes take off and captured these horrific photos. 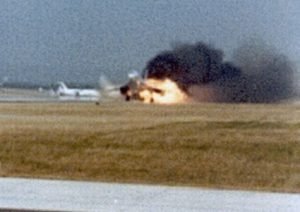 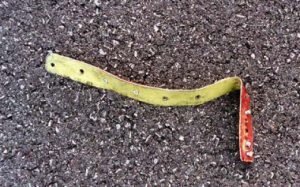 A few seconds after V1 the number 2 tyre (right front) on the left main landing gear was destroyed after having run over a strip of metal lost by a Continental Airlines DC-10-30 (N13067) which departed Paris as Flight 55 to Newark five minutes before.

The destruction of the tyre in all probability resulted in large pieces of rubber being thrown against the underside of the left wing and the rupture of a part of tank 5. A severe fire broke out under the left wing and around the same time engines 1 and 2 suffered a loss of thrust, severe for engine 2, slight for engine 1. 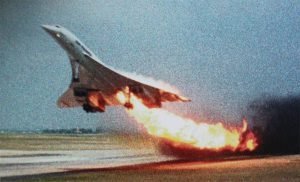 At 14:43:13, as captain commenced the rotation, the controller informed the crew the presence of flames behind the aircraft. The co-pilot acknowledged this transmission and the flight engineer announced the failure of engine no 2. Nine seconds later the engine alarm sounded and the flight engineer announced “shut down engine 2” then the captain called for the “engine fire” procedure. A few seconds later, the engine 2 fire handle was pulled and the fire alarm stopped. The co-pilot drew the captains attention to the airspeed, which was 200 knots. 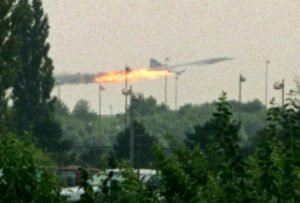 At 14:43:30 the captain called for landing gear retraction. The controller confirmed the presence of large flame behind the aircraft. Twelve seconds later the engine fire alarm sounded again for around 12 seconds.

It sounded for the third time at about 14:43:58 and continued until the end of the flight.

At 14:43:56 the co-pilot commented that the landing gear had not retracted and made several callouts in relation to the airspeed. Three seconds later, the GPWS alarm sounded several times. 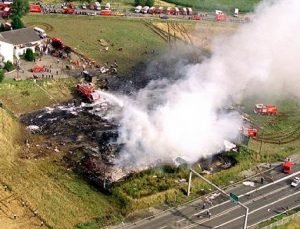 The co-pilot informed ATC that they were trying for Le Bourget aerodrome. Then the number 1 engine lost power as well. The aircraft entered a left turn until control was lost, crashing into hotel ‘Hotellisimo’ and bursting into flames. All 100 passengers & 9 crew members were killed as well as 4 people on the ground.

The investigation was led by the BEA (Bureau of Enquiry and Analysis for Civil Aviation Safety). The BEA published their final report on Air France Flight 4590 on 16 January 2002. The investigation concluded that:

The aircraft was overloaded by 810 kilograms (1,790 lb) above the maximum safe takeoff weight. Any effect on takeoff performance from this excess weight was negligible.

After reaching takeoff speed, the tyre of the number 2 wheel was cut by a metal strip (a wear strip) lying on the runway, which had fallen from the thrust reverser cowling door of the number 3 engine of Continental Airlines DC-10. The wearstrip had been replaced at Tel Aviv, Israel, during a C check on 11 June 2000. Further maintenance work had been performed at Houston, Texas, but the strip had been neither manufactured nor installed in accordance with the procedures as defined by the manufacturer.

The damage to the planes structure was so severe that the crash would have been inevitable, even with the engines operating normally. 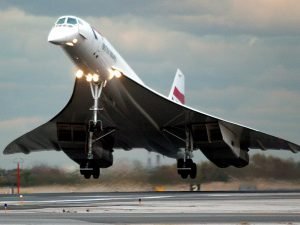 The accident led to modification being made to Concorde, including more secure electrical controls, Kevlar lining to the fuel tanks and specially developed bursting-resistant tyres.

Just before the service resumed, the 11 September attacks took place, resulting in a marked drop in passenger numbers and contributing to the eventual end of Concorde flights. Air France stopped flights in May 2003, while British Airways ended its Concorde flights in October 2003.