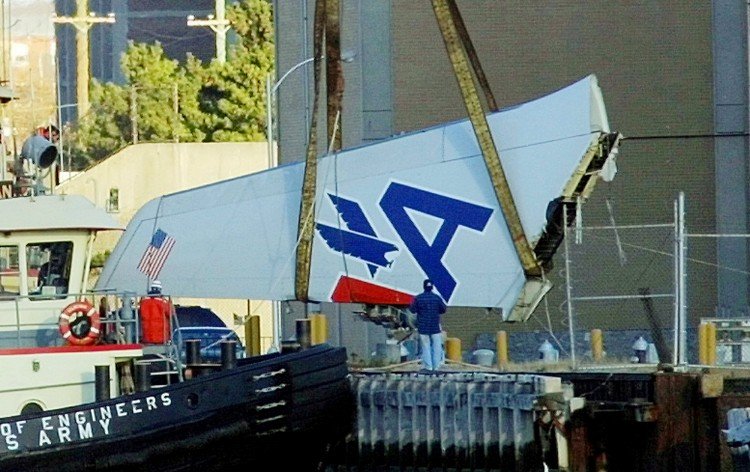 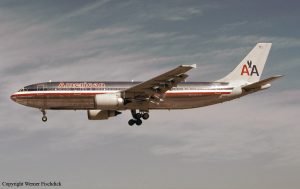 N14053, the aircraft involved in the accident. 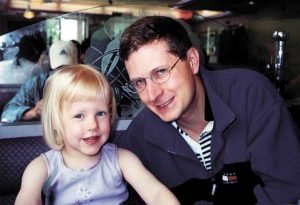 First Officer Sten Molin with his niece Casey Parsons in 2000.

Flight 587 was scheduled to leave John F Kennedy at 08:00 for a flight to Santo Domingo, Dominican Republic. The boarding process at gate 22 took a little longer than planned due to additional security procedures that delayed boarding. The gate was closed at 08:38 and pushback from the gate was accomplished at 9:00. 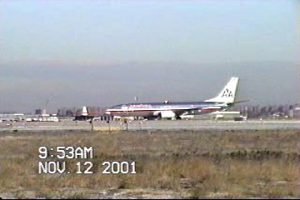 American Airlines Flight 587 taxiing to Runway 31L at 8:59AM (Timestamp not adjusted for Standard Time)

The crew taxied to runway 31L behind Japan Airlines Flight 047, a Boeing 747-400 bound for Tokyo, Narita. JL047 was cleared for takeoff at 9:11am, as the 747 climbed, the tower contacted Flight 587’s pilots and warned them about potential wake turbulence from the 747.

At 9:13:28 Flight 587 was cleared for takeoff from Runway 31L. The aircraft left the runway at 9:14:29, about 1 minute and 40 seconds after the JAL flight. From takeoff, the plane climbed to an altitude of 500 ft above mean sea level (msl) and then entered a climbing left turn to heading of 220. At 9:15:00, the pilot made initial contact with the departure controller informing him that the airplane was at 1,300 ft and climbing to 5,000 ft. The departure controller instructed the aircraft to maintain 13,000 ft. 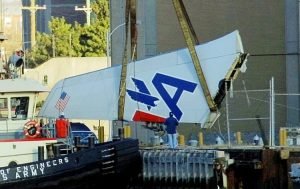 At 9:15:36, when the aircraft hit wake turbulence from the JAL flight just in front of it. The first officer attempted to stabilise the aircraft with alternating aggressive rudder inputs from left to right. This continued for at least 20 seconds, until 9:15:56, when the stress of the first officer’s repeated rudder movements caused the lugs that attached the vertical stabilizer and rudder to fail. The stabilizer separated from the aircraft and fell into Jamaica Bay, about one mile north of the main wreckage site.

Eight seconds later, the stall warning sounded on the cockpit voice recorder. At the moment the stabilizer separated from the aircraft, the plane pitched downwards, headed straight for Belle Harbor. As the pilots struggled to control the aircraft, it went into a flat spin. The resulting aerodynamic loads sheared both engines from the aircraft seconds before impact. The engines landed several blocks north and east of the main wreckage site. Losing the engines cut off power to the FDR at 9:16:00, while the CVR cut off at 9:16:15 moments before impact. 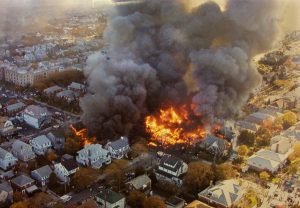 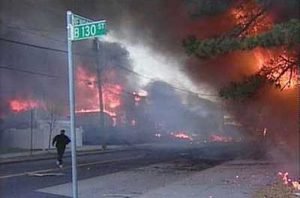 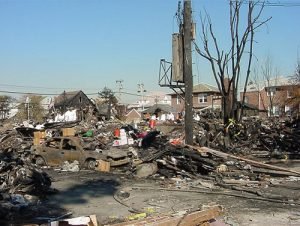 The fuselage slammed into Belle Harbor on Beach 131st Street, instantly destroying three houses. All 260 people aboard the plane and five people on the ground were killed instantly, and the impact forces and post-crash fire destroyed the wreckage.

The investigation into the crash of American Airlines Flight 587 was led by the National Transportation Safety Board (NTSB). 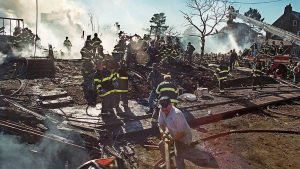 They concluded that the probable cause of the in-flight separation of the vertical stabilizer was the result of the loads beyond ultimate design that were created by the first officer’s unnecessary and excessive rudder pedal inputs. Contributing to these rudder pedal inputs were characteristics of the A300-600 rudder system design and elements of the American Airlines Aircraft Manoeuvring Program.