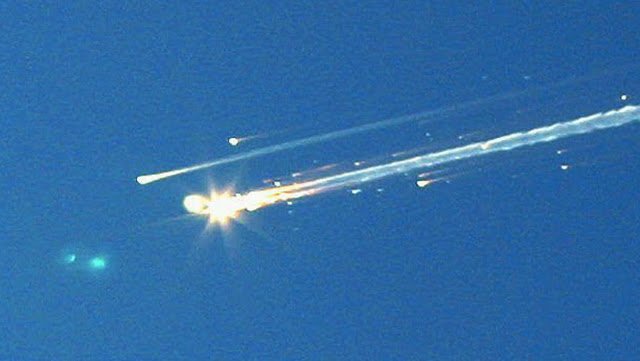 13 years ago today, STS-107 was the 113th flight of the Space Shuttle program and the disastrous 28th mission of Space Shuttle Columbia. The mission launched from Kennedy Space Center in Florida on January 16, 2003, and during its 15 days 22 hours, 20 minutes, 32 seconds in orbit conducted a multitude of international scientific experiments. Space Shuttle Columbia launched for the first time on mission STS-1 on April 12, 1981, the first flight of the Space Shuttle program. Over 22 year of service, it completed 27 missions. Mission STS-107 was planned to begin on January 11, 2001, the mission was delayed 18 times and eventually launched on January 16, 2003. About 82 seconds after launch, a suitcase-size piece of foam broke off from the External Tank, striking Columbia’s left wing reinforced carbon-carbon panels. This likely created a 6-to-10 inch diameter hole, allowing hot gases to enter the wing when Columbia re-entered the atmosphere. At the time of the foam strike the orbiter was at an altitude of about 66,000ft, traveling at Mach 2.46 (1,870 mph). Space Shuttle external tank foam block.
Cameras focused on the launch sequence revealed the foam collision but engineers could not pinpoint the location and extent of the damage. Although similar incidents had occurred on three prior shuttle launches without causing critical damage, some engineers at the space agency believed that the damage to the wing could cause a catastrophic failure. Their concerns were not addressed in the two weeks that Columbia spent in orbit because NASA management believed that even if major damage had been caused, there was little that could be done to remedy the situation.
Moments before – onboard Columbia during Re-Entry
Columbia re-entered the earth’s atmosphere on the morning of February 1. Ten minutes later, at 8:53 am as the shuttle was 231,000ft above the California coastline traveling at 23 times the speed of sound the first indications of trouble began. Hot gases began to enter the wing through the undetected hole causing the wing to begin to disintegrate. The first debris began falling to the ground in West Texas near Lubbock at 8:58 am. One minute later, the last communication from the crew was heard. At 9 am, the shuttle disintegrated over southeast Texas near Dallas. Killing all 7 crew members. Residents in the area heard a loud boom and saw streaks of smoke in the sky. Debris and the remains of the crew were found in more than 2,000 locations across East Texas, Arkansas and Louisiana.
Inside mission control during STS-107 Columbia failed re-entry and disaster.
In August 2003, an investigation board issued a report revealing that it would have been possible either for the Columbia crew to repair the damage to the wing or for the crew to be rescued from the shuttle. The Columbia could have stayed in orbit until February 15 and the already planned launch of the shuttle Atlantis could have been moved up as early as February, 10.
Article By: @AirCrashMayday
Categories: History, SpaceBy admin4493February 1, 2016
Share this post
Share on FacebookShare on Facebook TweetShare on Twitter Share on WhatsAppShare on WhatsApp Share on LinkedInShare on LinkedIn

Chinese rocket’s first stage, one of the largest uncontrolled pieces of space debris, fell down to Earth
May 13, 2020

On May 27, NASA will once again launch American astronauts on American rockets from American soil
April 18, 2020