#OnThisDay in 2007, Garuda Indonesia Flight 200 overruns the runway on landing at Yogyakarta 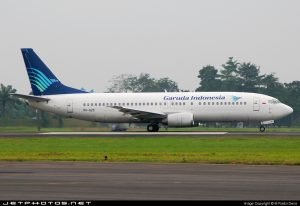 The cockpit crew of Garuda Indonesia Airways Flight 200 consisted of Captain Marwoto Komar and First Officer Rachman. Both were very experienced pilots flying for Garuda. The aircraft has accumulated a total of 35,157 airframe hours and 37,328 cycles since its first flight on 5 November 1992. 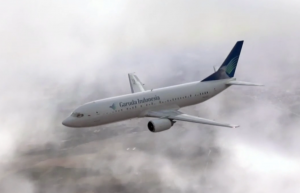 The captain intended to make an ILS approach to runway 09 at Yogyakarta and briefed the co-pilot accordingly. Yogyakarta approach cleared the aircraft for a visual approach, with a requirement to proceed too long final and report runway in sight. Although the crew acknowledged the visual approach clearance, they continued with the ILS approach but did not inform the controller. The descent and approach were conducted in visual meteorological conditions.

At 07:55:33, when the aircraft was 10.1 miles from the runway, it was 1,427 feet above the initial fix of 2,500 feet published in the approach chart, and the airspeed was 283 knots. The captain descended the aircraft steeply in an attempt to reach the runway, but in doing so, the airspeed increased excessively. As the aircraft was being flown at speeds that were in excess of the wing flaps operation speed, the copilot elected not to extend the flaps as instructed by the captain. During the approach, the Ground Proximity Warning System (GPWS) alerts and warnings sounded 15 times and the copilot called for the captain to go around. 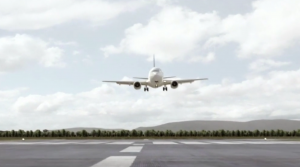 The captain continued the approach with flaps 5 degrees, and the aircraft attained the glideslope near the runway 09 threshold. Flaps 5 degrees is not a landing flap setting. The aircraft crossed the threshold, 89 feet above the runway, at an airspeed of 232 knots, 98 knots faster than the required landing speed for flaps 40 degrees. The wind was north easterly at 9 knots. The ground speed was 235 knots. The aircraft touched down at an airspeed of 221 knots, 87 knots faster than landing speed for 40 degrees flap. Shortly after touching down, the copilot called, with high intonation, for the captain to go around. 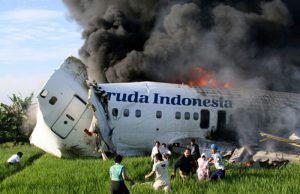 One of the passengers was a cameraman for the Australian Seven Network. He escaped from the burning wreckage with his camera and started recording the aftermath. He made a telephone call inform the network’s Sydney newsroom and the footage was beamed back to appear on the 6pm news of that night. Twenty passengers and one crew member were killed as the result of the crash.

The investigation into the crash of Garuda Indonesia Airways Flight 200 was led by the Indonesia National Transportation Safety Committee (NTSC) and assisted by the ATSB and NTSB. 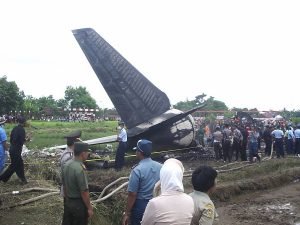 They concluded that the probable causes were:

1. Flight crew communication and coordination were less than effective after the aircraft passed 2,336 feet on descent after flap 1 was selected. Therefore the safety of the flight was compromised.
2. The captain flew the aircraft at an excessively high airspeed and steep descent during the approach. The crew did not abort the approach when stabilised approach criteria were not met.
3. The captain did not act on the 15 GPWS alerts and warnings, and the two calls from the copilot to go around.
4. The copilot did not follow company instructions and take control of the aircraft from the captain when he saw that the captain repeatedly ignored warnings to go around.
5. Garuda did not provide simulator training for its Boeing 737 flight crews covering vital actions and required responses to GPWS and EGPWS alerts and warnings such as ‘TOO LOW TERRAIN’ and ‘WHOOP, WHOOP PULL UP’. 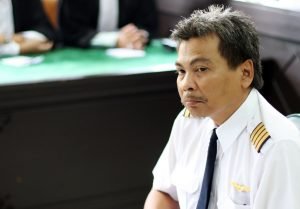 On 4 February 2008, Captain Marwoto Komar was arrested and charged with six counts of manslaughter. The charge carried a penalty up to life imprisonment if the court found the crash was deliberate. The co-pilot testified that he had told the captain to go-around because of excessive speed and that he then had blacked out due to the severe buffeting.

On 6 April 2009, the captain was found guilty of negligence and sentenced to 2 years in jail. The captain’s lawyers stated their intention to appeal on the basis that the Convention on International Civil Aviation, to which Indonesia is a party, stipulates that aviation accident investigation reports cannot be used to ascribe blame, but only to determine the cause. The Garuda Pilot’s Association and Indonesian Pilots Federation threatened to strike in protest against the conviction.

On 29 September 2009, the conviction was quashed by the Indonesian High Court, which found that the prosecutors had failed to prove that the pilot was “officially and convincingly guilty of a crime”.