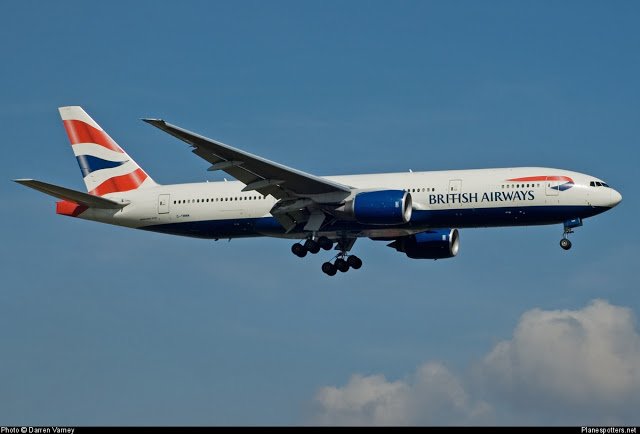 During final approach to London Heathrow Airport at an altitude of 720ft and 2 minutes until touchdown. The engines repeatedly failed to respond to a demand for increased thrust from the autothrottle. In attempting to maintain the instrument landing system (ILS) glide slope, the autopilot sacrificed speed, which reduced to 108 knots (200 km/h) at 200 feet (61 m). The autopilot disconnected at 150ft, as the co-pilot took manual control. Meanwhile, the captain reduced the flap setting from 30 degrees to 25 degrees to decrease the drag on the aircraft and stretch the glide.

The plane passed above traffic on the A30 and the airport’s Southern Perimeter road and landed on the grass approximately 270 metres (890ft) short of runway 27L. The captain declared an emergency to the control tower a few seconds before landing.

British Airways Flight 38 ATC recording
During the impact and short ground roll, the nose gear collapsed, the right main gear separated from the aircraft penetrating the central fuel tank and cabin space, and the left main gear was pushed up through the wing. The aircraft came to a rest on the threshold markings at the start of the runway.  Forty-six occupants on board received minor injuries. One passenger received serious injuries.

The investigation concluded that Ice crystals in the fuel were blamed as the cause of the accident, clogging the fuel-oil heat exchanger (FOHE) of each engine. This restricted fuel flow to the engines when thrust was demanded during the final approach to Heathrow. Boeing identified the problem as specific to the Rolls-Royce engine fuel-oil heat exchangers, and Roll-Royce subsequently developed a modification of its FOHE.