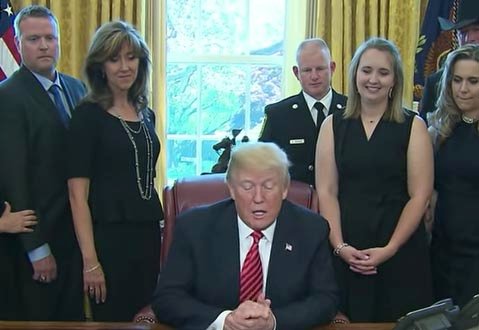 President Trump welcomed the crew of Southwest Flight 1380 to the White House on Tuesday.

Sitting in the Oval Office, President Trump greeted Southwest pilot Captain Tammie Jo Shults, who safely landed flight #WN1380. He noted that Shults is “one of the first women ever to fly tactical fighter aircraft in the United States Navy.”

“You drew from years of training and safety, and you knew how to land that plane,” Trump said. “We Salute you and every member of this crew. Thank you very much.”

Passenger Jennifer Riordan was killed when jet engine failed midair and its debris blew up a window. Riordan was sucked into a hole and fellow passenger rushed to her aid to rescue her.

Trump remembered Riordan, 43, at today’s meeting with the crew: “Our hearts break for the family of the passenger, who tragically lost her life,” Trump said. “We send our prayers to Jennifer’s husband and two beautiful, young children. We ask God to hold them close as they grieve the lost of a loving wife and mother.”

Tuesday’s meeting comes exactly two weeks after Southwest Flight 1380, bound for Dallas, was forced to make an emergency landing in Philadelphia after one of the engine’s fan blades failed due to metal fatigue. A chain reaction of events followed in which the engine itself blew apart, shattered a window, and caused a female passenger to be partly blown out of the aircraft.