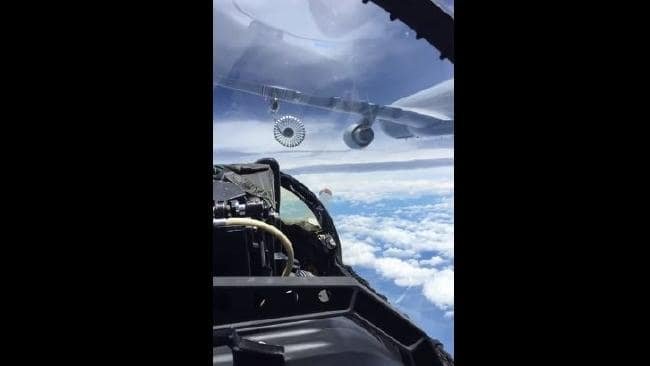 The Royal Australian Air Force (RAAF) has released a short video of 2 Australian F/A-18B Hornets being refuelled by a RAAF KC-30A Multi Role Tanker Transport (MRRT). The KC-30A is a heavily modified Airbus A330 that provides Air to Air Refuelling and strategic air lift capability. The RAAF currently has 6 KC-30A’s with another on order, with another 2 under consideration. The KC-30A has an Advanced Refuelling Boom System mounted on the tail of the aircraft, and a pair of all-electric refuelling pods under each wing with refuelling controlled from the cockpit. The system uses 3D cameras and sensors to determine the precise point of contact automatically.

The aircraft is used to refuel Australia’s F/A-18A/B Hornets, F/A-18F Super Hornets, E/A-18G Growlers, E-7A Wedgetails, C-17A Globemaster III and other KC-30As, with the aim of including Australia’s new Poseidon P-8As. They have also been used to refuel aircraft from allies, such as the as the F-16C, Tornado, Typhon, B-1B and F-35A. One RAAF KC-30A has also been based in the Middle East as part of Operation OKRA to re-fuel Australian and allied planes in the fight against ISIS since September 2014.